« Back to all memories

From the Midwest to West Texas 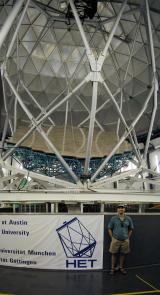 I grew up on a farm near the town of Boonville, IN, and I have been interested in Astronomy since I was five years old. I received a 2.4-inch telescope as Christmas gift when I was ten and I joined the Evansville Astronomical Society when I was twelve. The club's observatory was at a local park where the the skies were pretty dark. The original telescope was a 12.5 inch F/10 Reflector that was made by the astronomer Edgar Everhart. It was replaced a long time ago with a Celestron C-14.

Shoemaker-Levy 9 impacts from the 0.9-meter Telescope

The Shoemaker-Levy 9 impacts on Jupiter occured July 16-22, 1994 as pieces of the object, earlier broken into a "string of pearls" by the immense gravity of Jupiter, one by one impacted Jupiter's upper atmosphere leaving scars in the visible image of Jupiter that were larger in size than the Earth.  Had one of these objects hit the Earth it would have been devastating, but thankfully Jupiter had caught them and was absorbing the many blows.  Observatories all over the world had plans to view the impacts if they could be seen from Earth, but no one knew if it would be possible.

As a graduate student at UT, I made several visits to McDonald Observatory. One night in particular stands out in my mind. In the early morning hours Comet Hale-Bopp was hanging above the horizon, looking absolutely spectacular in the observatory's dark skies.

I was a college student at UT in the early '90s, and had to do a photo essay for photojournalism class. I chose McDonald Observatory as my subject matter. I didn't know a soul at the Observatory, but contacted them and asked permission to visit. I was allowed to come out and photograph the telescopes inside the domes, and got a private tour of just about everything. It was incredible.