McDonald Observatory is a research unit of The University of Texas at Austin and one of the world's leading centers for astronomical research, teaching, and public education and outreach. Observatory facilities are located atop Mount Locke and Mount Fowlkes in the Davis Mountains of West Texas, which offer some of the darkest night skies in the continental United States. Additionally, the observatory is a partner in the Giant Magellan Telescope under construction in Chile. McDonald's principal research telescopes include:

The Giant Magellan Telescope (GMT) now under construction in Chile is the first in a new generation of extremely large telescopes. Its seven mirrors will span 25 meters. UT Austin is a founding partner in the collaboration which includes several other U.S. universities and partner institutions from around the world. The telescope is expected to see first light in 2029. More information is available at the project website.

With its 10-meter mirror, the HET is one of the world's largest optical telescopes. First dedicated in 1997, the telescope underwent a complete and extensive upgrade in 2017. The HET is optimized for spectroscopy, the decoding of light from stars and galaxies to study their properties. This makes it ideal for searching for planets around other stars, as well as probing distant galaxies, exploding stars, black holes, and more. This telescope is critical to a major study of dark energy, the Hobby-Eberly Telescope Dark Energy Experiment (HETDEX). The HET is a joint project of The University of Texas at Austin, The Pennsylvania State University, Ludwig-Maximilians-Universität München, and Georg-August-Universität Göttingen.

Constructed 1966-68, the Smith Telescope has a 2.7-meter (107-inch) mirror, which was the third largest in the world when built. The telescope is used every clear night of the year.

Constructed 1933-39, the Struve Telescope was the first major telescope to be built at McDonald Observatory. Its 2.1-meter (82-inch) mirror was the second largest in the world at the time. The telescope is still in use today.

McDonald also operates several one-meter class telescopes. These include MONET/North, a node of the Las Cumbres Observatory Global Telescope Network, as well as 0.9-meter (36-inch) and 0.8-meter (30-inch) telescopes. Additionally, the Observatory is home to the 0.8-meter (30-inch) McDonald Laser Ranging Station operated by UT Austin's Center for Space Research, a 20-inch telescope operated by Boston University, and a 0.45-meter automated telescope that is part of the ROTSE collaboration.

We would like to acknowledge that we are meeting on the Indigenous lands of Turtle Island, the ancestral name for what now is called North America. Moreover, we would like to acknowledge the Alabama-Coushatta, Caddo, Carrizo/Comecrudo, Coahuiltecan, Comanche, Kickapoo, Lipan Apache, Tonkawa and Ysleta Del Sur Pueblo, and all the American Indian and Indigenous Peoples and communities who have been or have become a part of these lands and territories in Texas. 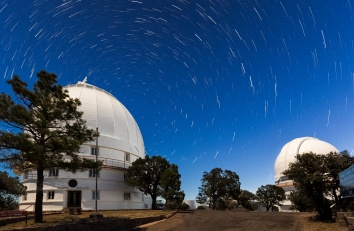 Timeline
Learn more about the history of the Observatory through our interactive timeline, and suggest milestones to add to it.

Memories Blog
Have a favorite memory of McDonald Observatory? Share your stories and photos of the Observatory on our interactive blog, and read others' stories from the 1930s right up until today.