FORT DAVIS, Texas — After more than three decades of sharing astronomy with the public and working to protect dark skies from light pollution, Bill Wren has retired from McDonald Observatory.

In recent years, Wren has worked as Special Assistant to the Superintendent, focusing on preserving the dark skies over McDonald Observatory and surrounding areas. Dubbed the “Angel of Darkness” by the media, Wren has met with countless community groups and local officials to advocate for dark skies.

As fossil fuel exploration in the Permian Basin expanded significantly, Wren also has worked closely with oil and gas companies in West Texas to advocate for improved lighting practices at their facilities. He helped to promote the idea that better lighting fixtures not only protect dark skies, but provide improved safety and cost savings for these sites — a win-win scenario.

Self-taught in astronomy, in the 1970s and ‘80s Wren worked as a family counselor, helping to found a Youth and Family Resource Center in Austin that exists today. After becoming an astronomy tutor as well as auditing astronomy courses at UT Austin with the observatory’s then-Director Frank Bash, Wren was hired as Public Affairs Specialist to lead tours and work in other public programs at McDonald, including Star Parties, in 1990.

It was in his early years at the observatory that then-Superintendent Ed Barker asked Wren to attend the first meeting of a new organization called the International Dark Sky Association (IDA). Today IDA is the leading organization promoting the protection of dark skies worldwide. Wren and McDonald Observatory have been involved from the beginning.

According to current Superintendent Teznie Pugh, “As the 2020 global pandemic surged, Bill shifted his focus and provided the founding efforts towards establishing an IDA-certified Dark Sky Reserve in the region surrounding McDonald Observatory. He brought together support from state and national parks, conservation groups, government officials, private citizens, and industry leaders across the region in an effort to meet IDA criteria.

“While establishing the reserve is still an ongoing effort,” she said, “it would not exist without Bill’s vision, bridge building, and passion. These efforts will serve the observatory for many years to come.”

Over his 32 years on staff, Wren has fulfilled many other roles at McDonald in addition to promoting dark skies. In particular, he has contributed significantly to building and commissioning telescopes on site — both for scientists and for the public.

Wren was deeply involved the early days of the Hobby-Eberly Telescope (HET), one of the world’s largest optical telescopes. Along with McDonald’s Chief Astronomer Gary Hill and engineer Mike Marcario, Wren conducted the site survey that helped to determine where to build the HET. After it was built, Wren served as the commissioning telescope operator for two years, helping to get HET operations up and running smoothly.

Additionally, Wren and a team of collaborators designed and built the smaller Supernova Search Telescope, funded by a grant from the National Science Foundation. They used it to discover four exploding stars, or supernovae.

Most recently, Wren and others built the unique Wren-Marcario Accessible Telescope (WMAT) now in the public telescope park at the observatory’s Frank N. Bash Visitors Center. Based on the innovative design of the Supernova Search Telescope, WMAT provides access to deep views of the night sky for observatory visitors in wheelchairs, allowing them to share fully in the wonders of the universe. (The telescope is partially named for Wren’s father, an engineer, who also worked on the project.)

After more than 30 years sharing and protecting the skies over West Texas, Wren looks back fondly on his time at the observatory. “I feel fortunate to have been affiliated with so many great astronomy educators,” he said, “and with such a fine institution and such a fine group of people.”

Currently in the process of relocating to Cloudcroft, New Mexico, Wren says he plans to stay active in astronomy during retirement. 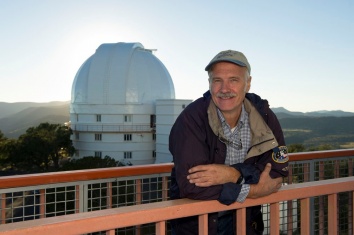