AUSTIN — Astronomer Trent Dupuy of The University of Texas at Austin has shown what separates true stars from wannabes. Not in Hollywood, but in the whole universe. He will present his research today in a news conference at the semi-annual meeting of the American Astronomical Society in Austin.

“When we look up and see the stars shining at night, we are seeing only part of the story,” Dupuy said. “Not everything that could be a star ‘makes it,’ and figuring out why this process sometimes fails is just as important as understanding when it succeeds.”

Stars form when a cloud of gas and dust collapses under gravity, and the resulting ball of matter is hot enough and dense enough to sustain nuclear fusion at its core. Fusion produces huge amounts of energy — it’s what makes stars shine. In the Sun’s case, it’s what makes most life on Earth possible.

But not all collapsing gas clouds are created equal. Sometimes, the collapsing cloud results in a ball that isn’t dense enough to ignite fusion. These ‘failed stars’ are known as brown dwarfs.

This definition that separates stars from brown dwarfs has been around for a long time.  In fact, astronomers have had theories about how massive the collapsing ball has to be in order to form a star (or not) for more than 50 years. However, the dividing line in mass has never been confirmed by experiment.

Now a team led by Texas astronomer Trent Dupuy has done just that. He and Michael Liu of the University of Hawaii found that an object must weigh at least 70 Jupiters in order to ignite fusion. If it weighs less, the light does not switch on. It’s a brown dwarf.

How did they reach that conclusion? For a decade, Dupuy and Liu studied 31 faint binaries (pairs of either brown dwarfs or the lowest mass stars that orbit each other) using two powerful telescopes in Hawaii — the Keck Observatory and the Canada-France-Hawaii Telescope —  as well as data from the Hubble Space Telescope.

Their goal was to find out the masses of the objects in these binaries, since mass defines the boundary between stars and brown dwarfs. Astronomers have been using binaries to measure masses of stars for more than a century. To determine the mass of a binary, one measures the size and speed of the stars’ orbits around an invisible point between them where the pull of gravity is equal, called the “center of mass.” However, binary brown dwarfs orbit much more slowly than binary stars, due to their lower masses. And because brown dwarfs are dimmer than stars, they can only be well-studied with the world’s most powerful telescopes.

To measure their masses, Dupuy and Liu collected images of the faint binaries over several years, tracking their orbital motion using high-precision observations. They used the 10-meter Keck Telescope, along with its laser guide star adaptive optics system, and the Hubble Space Telescope to obtain the extremely sharp images needed to distinguish the light from each object in the pair.

However, the price of such zoomed-in, high-resolution images is that there is no reference frame to identify the center of mass. Wide-field images from the Canada-France-Hawaii Telescope containing hundreds of stars provided the reference grid needed to measure the center of mass for every system.  Such data also yielded a precise distance to each system. Because these faint binary pairs are much closer to the Earth than other stars in the images, they appear to move back and forth slightly every year as Earth orbits the Sun (an effect called “parallax”), and the exact amounts they move can be used to compute their distances.

The result of the decade-long observing program is the first large sample of brown dwarf masses.

“As they say, good things come to those who wait. While we’ve had many interesting brown dwarf results over the past 10 years, this large sample of masses is the big payoff. These measurements will be fundamental to understanding both brown dwarfs and stars for a very long time,” Liu said.

The information they have assembled has allowed them to draw a number of conclusions about what distinguishes stars from brown dwarfs.

Objects heavier than 70 Jupiter masses are not cold enough to be brown dwarfs, implying that they are all stars powered by nuclear fusion. Therefore 70 Jupiters is the critical mass below which objects are fated to be brown dwarfs. Their determination for the mass dividing line is somewhat lower than theories had predicted but still consistent with the latest models of brown dwarf evolution.

In addition to the mass cutoff, they discovered a surface temperature cutoff. Any object cooler than 1,600 Kelvin (about 2,400 degrees Fahrenheit) is not a star, but a brown dwarf.

This work will help astronomers understand the conditions under which stars form and evolve — or sometimes fail. In turn, the success or failure of star formation has an impact on how, where, and why solar systems form.

This research will be published soon in The Astrophysical Journal Supplement. 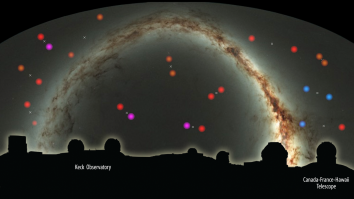 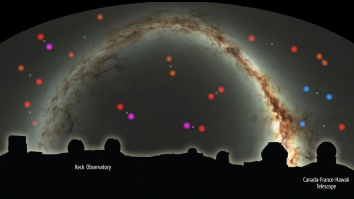