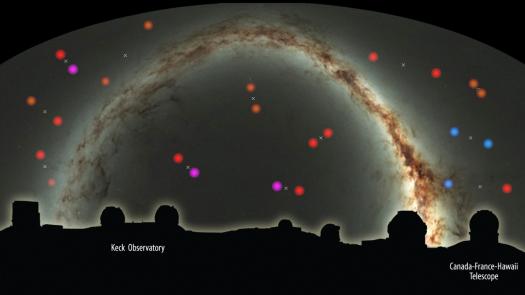 This image shows several of the binaries from this study, each orbiting around its center of mass, which is marked by an ‘x.’ Colors indicate surface temperatures, from warmest to coolest: gold, red, magenta, or blue. The background image is a map of the entire sky visible from Hawaii and a silhouette of Mauna Kea (home of Keck Observatory and the Canada-France-Hawaii Telescope, where this study was conducted over the past decade). Each binary is shown roughly where it is located in the night sky. The actual sizes of these orbits on the sky are very small (about one billionth the area covered by each ‘x’), but the orbit sizes shown in the animation are accurate relative to each other. The animation is also in extreme fast-forward; each second corresponds to approximately two years of real time. (Credit: Trent Dupuy/Karen Teramura/PS1SC)