FORT DAVIS, Texas — After several years and a massive team effort, one of the world’s largest telescopes has opened its giant eye again. The Hobby-Eberly Telescope (HET) at The University of Texas at Austin’s McDonald Observatory has completed a $25 million upgrade and, now using more of its primary mirror, has achieved “first light” as the world’s third-largest optical telescope.

The new HET made its first image on July 29. After extensive testing and fine-tuning, the team reports that image quality meets specifications — sharp enough to resolve features one mile across on the surface of the Moon (or in astronomical terms, a resolution of 0.9 arcseconds.)

Spurred by the HET collaboration’s desire to do big science projects, including the forthcoming Hobby-Eberly Telescope Dark Energy Experiment (HETDEX), the upgrade was a major undertaking that includes new optics, new mechanics, and new software. Today, HET is essentially a new telescope — only its primary mirror remains unchanged.

What makes the new HET great? One major factor is the new Harold C. Simmons Dark Energy Optical System. This set of optics sits above the telescope’s main mirror, in the location usually occupied by a secondary mirror.

McDonald Observatory chief scientist Phillip MacQueen designed the system. He explained that the Simmons System, informally called a “corrector,” is a complex set of optics, including four mirrors, that achieves two key tasks.

Second, the Simmons System allows good images from all parts of the telescope’s greatly enlarged field of view. The telescope’s field of view has increased by 120 times, and is 70% of the diameter of the full Moon (that is, 22 arcminutes or one-third of a degree).

Research Associate Hanshin Lee managed a nearly seven-year process by The University of Arizona College of Optical Sciences to build and test the $6 million Simmons Optical System. It was a tough process to verify the optics and ensure they were set up properly.

The work consisted of shaping the four mirrors (three 1-meter mirrors and one 0.25-meter mirror) to exacting specifications and testing those shapes, applying a specialized reflective coating, putting them together into a single package, and aligning them to high accuracy.

Once the Simmons System was built, transporting the 2-ton assembly safely from Tucson to McDonald Observatory in West Texas was an undertaking fraught with danger. Its optics were so finely balanced that hitting any pothole could spell a problem. It made the 500-mile trip overnight, going 45 miles per hour, with a police escort and arrived May 28. Later testing verified that nothing had moved in the process — the optics were still aligned within a fraction of the width of a human hair.

Lee said that throughout the difficult building and testing process “our staff was really fantastic in stepping up — while solving problems, they showed a lot of creativity and conviction that they could do it,” noting that it took  many people with different talents to make the project a success.

The Simmons System is “one of the most complex optical systems ever deployed in astronomy,” said Gary Hill, McDonald Observatory’s chief astronomer and principal investigator for HETDEX.

Because it allows more of HET’s 10-meter by 11-meter mirror to be used, it makes HET a larger telescope. The mirror’s effective size has increased from 9.2 meters to 10 meters. This means that HET is now tied for the world’s third-largest optical telescope.

The telescope also features a new tracker that supports the Simmons System (and a suite of instruments to ensure its alignment to extremely high precision) as it moves across the primary mirror tracking cosmic targets across the sky. The new tracker was built by The University of Texas at Austin Center for Electromechanics. A McDonald Observatory team led by Niv Drory developed HET’s entirely new control system.

The upgraded telescope is now able to track and guide on cosmic targets. The next step for the HET team is to complete commissioning of the telescope. Then the team will move on to commissioning HET’s three new science instruments.

Larry Ramsey, chairman of the HET Board of Directors and professor at Penn State, remarked, “The revitalized HET will contribute to many areas of science — not only the study of dark energy; but the nature of dark matter; the first stars in the universe; starburst galaxies; massive black holes; and to the discovery, confirmation, and characterization of extrasolar planets.”

The Hobby-Eberly Telescope came online in 1997. It is a partnership between The University of Texas at Austin, The Pennsylvania State University, Georg-August-Universität Göttingen, and Ludwig-Maximilians-Universität München. The HET upgrade was funded by a combination of federal, state, and private sources. 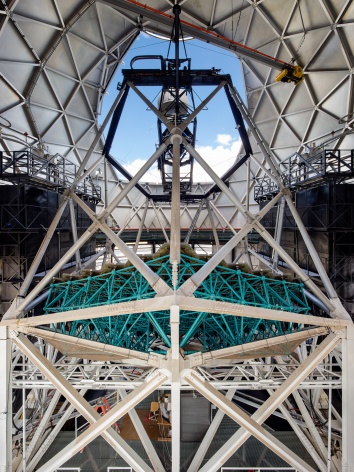 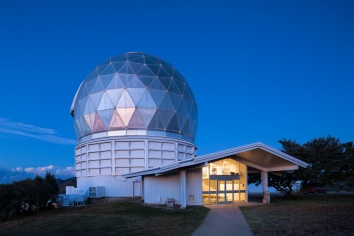 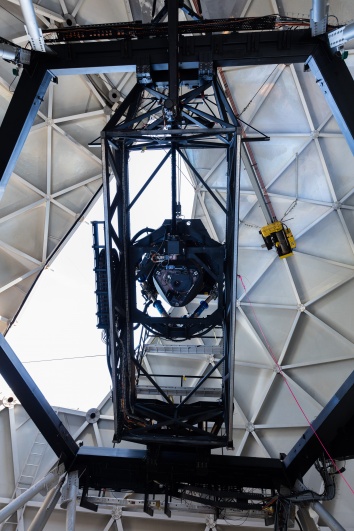 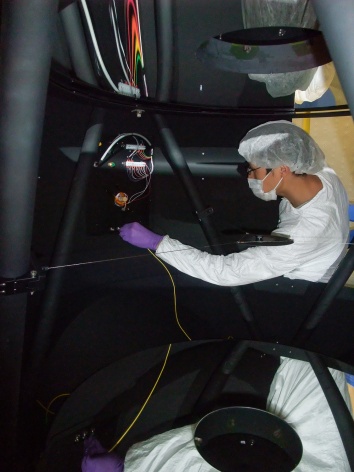