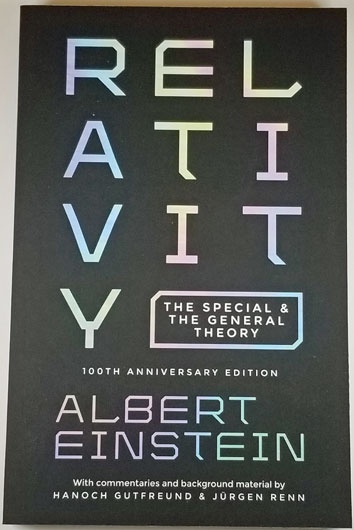 Realitivity The Special & The General Theory 100th Anniversary Edition by Albert EinsteinWith commentaries and background material by Hanoch Gutfreund & Jurgen RennAfter completing the final version of his general theory of relativity in November 1915, Albert Einstein wrote "Relativity". Intended for a popular audience, the book remains one of the most lucid explanations of the special and general theories ever written. This edition of Einstein's celebrated book features an authoritative English translation of the text along with commentaries by Hanoch Gutfreund and Jurgen Renn that examine the evolution of Einstein's thinking and cast his ideas in a modern context. Providing invaluable insight into one of the greatest scientific minds of all time, the book also includes a unique survey of the introductions from past editions, covers from selected early editions, a letter from Walter Rathenau to Einstein discussing the book, and a revealing sample from Einstein's original manuscript.