During April of 1982, I attended a Planetarium Conference with a very good friend of mine, Bryan Snow. Bryan was then Director of the Scobee Planetarium at San Antonio College. Just before we left on our journey we contacted a local meteorologist about the weather conditions in Fort Davis. His comment was, "You poor boys." The forecast was a snow storm for the Davis Mountains. Mind you, this was late for this time of year. While traveling out interstate 10 West the weather was very nice. When we arrived in Fort Stockton, Texas we noticed the outside temperature dramatically dropped. We stopped for lunch in Fort Stockton and noticed the buses traveling from the West had sheets of ice on the front grills. We did not think much of it and proceeded with our trip to the Davis Mountains.

When we approached the mountainous area, we encountered one of the most beautiful snow storms I have ever seen. Living in San Antonio, Texas, for so many years one rarely sees snowfall. So this was a real treat. Arriving at the Indian Lodge located at the Davis Mountain State Park, snow had blanketed much of the area.

The Indian Lodge was not only our hotel accommodations but also the site of the Planetarium Conference. One of the speakers at the conference was then McDonald Observatory Director Dr. Harlan Smith. The conference went well and later we all wondered if the skies would clear. Harlan Smith said it will be clear tonight. I then asked Dr. Smith if it would be alright to set up my vintage orange Celestron C8 telescope on Mt. Locke near the 107" telescope dome. Harlan said it was okay.

At that point he explained he had recently returned from an Astronomical Conference in Greece. He said he was there with some of the most notable astronomers in the world. While at the conference they stepped outside to look at the night sky. The gentleman informed me many of these astronomers could not identify the bright object in the western sky as the planet Venus. He then proceeded to have a class on whats up in tonight's sky which he instructed. The gentleman Bryan and I were observing with was Dr. Harlan Smith. Dr. Smith was not only a professional astronomer but also an observer.

That evening was one of the most memorable experiences of my life, that I will always cherish. The 107" Telescope on top of Mount Locke now bears his name. 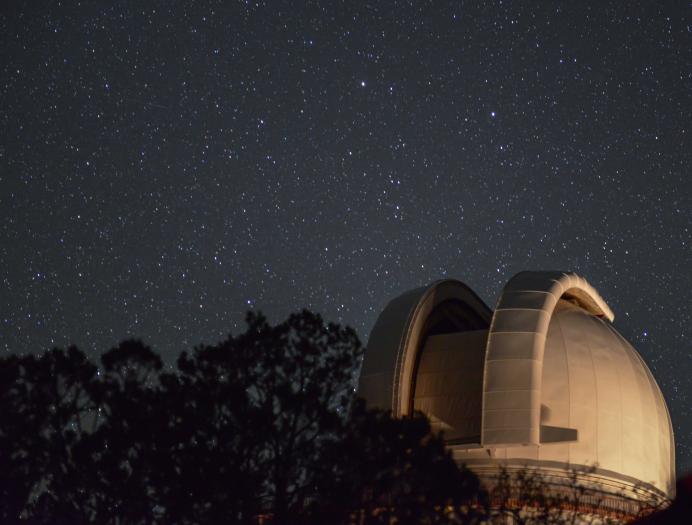