This was my very first trip to the observatory! Having no idea where the observatory was at, but knowing it was going to take me eight hours to drive, I packed my belongings late the night before, after being at school all day teaching my junior high kiddos, and got minimal sleep. I left my home a little earlier than normal and drove non stop, except for fuel and food of course, by myself. Then taking that winding road (118) off the Interstate up to the mountain top, was a bit more than I was ready for, but because I procrastinated felt it would be just fine. I knew I would check in, get my lodging, at the time it was at the Indian Lodge and then get me some rest for the next day's activities! Little did I know it would resemble boot camp I had attended some 30 years earlier in San Antonio!

Upon arriving and checking in, I was extremely tired and was informed where the classroom was and would be starting the training THEN! Although the staff was no where close to the drill instructors I had at boot camp, it was that I was expecting some rest prior to training beginning and did not get any. 18 plus hours was a bit of a long day, especially driving almost half of it. I did pick up quite a bit of information those first hours and was glad we attended. The next morning, although somewhat early and late to bed that night made for another long day, but one filled with exciting learning and things I was able to use in my classes.

I also had another exciting story the second night at the Indian Lodge. It had begun raining and my roommate and I had a great room. After we had returned from the observatory for the night, we entered our room to find we had a leak. My roommate was not so put out as I was, since the leak was over MY bed! Fortunately, they had another room and we moved that night, but in the rain!

Needless to say, the rest I did not get while at the observatory was not really needed as the staff had so much for us to do and accomplish, I completely forgot all about the rest and was able to concentrate on learning so I could be a better facilitator at my school.

Thank you to each and every one of those fantastic observatory staff members! 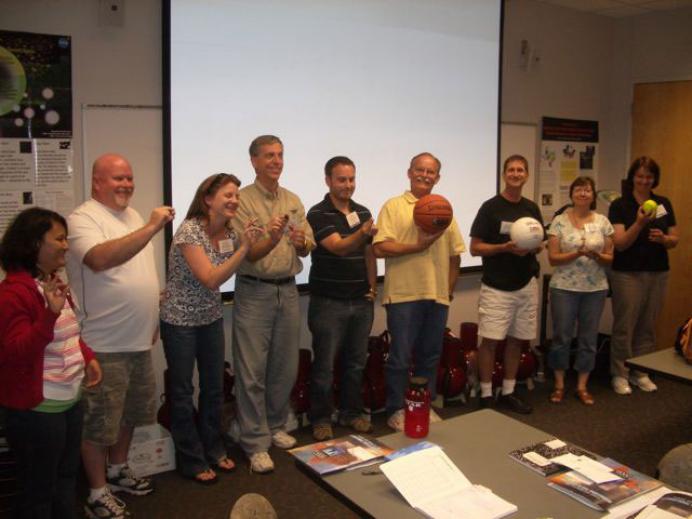