With its 11-meter (433-inch) mirror, the Hobby-Eberly Telescope (HET) is one of the world's largest optical telescopes. It was designed specifically for spectroscopy, the decoding of light from stars and galaxies to study their properties. This makes it ideal in searching for planets around other stars, studying distant galaxies, exploding stars, black holes and more. 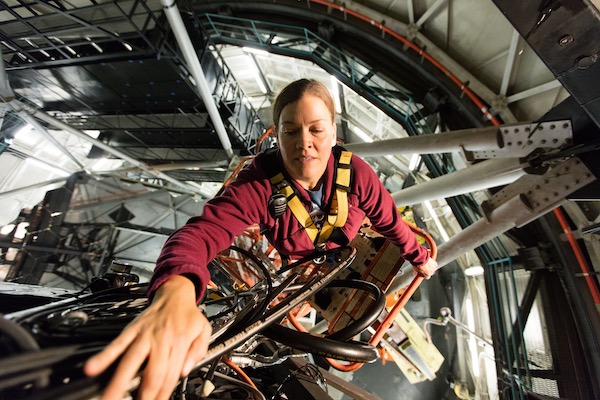 First dedicated in 1997, the telescope's unique design allowed for construction of a very large modern telescope at a fraction of the cost of similarly sized instruments. In 2016, a multiyear $40 Million upgrade was completed, expanding the telescope’s field of view to an area of sky 120 times larger than before.

Unlike most other telescopes, which tilt up and down in altitude, the HET's mirror is always tilted at 55 degrees above the horizon. However, the tracker mounted above the telescope moves in six directions, allowing the HET to study 70 percent of the visible sky. The 80-ton telescope rotates on a bed of air, using air cushions to lift and position the enormous instrument.

The telescope's mirror looks like a honeycomb. It's made up of 91 hexagonal mirrors that form a reflecting surface measuring 11 by 10 meters. The segments must be aligned exactly to form a perfect reflecting surface for good observations. HET is classified as a 10-meter telescope, making it the third largest optical telescope in the world. 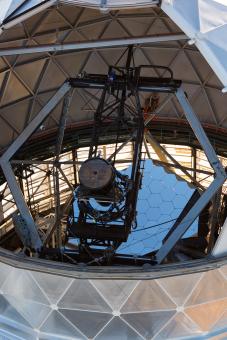 The HET uses a queue scheduling process. Astronomers submit proposals for research and selected projects are scheduled for completion within a four-month period. Each night, a resident astronomer decides which project is best suited to be carried out, based on factors like priority ranking of the projects, weather, and Moon phase. Queue scheduling makes sure that the HET is used efficiently, and makes the telescope especially well-suited to studying targets of opportunity -- those events in the heavens that arise without warning, such as exploding stars.

HET is currently involved in the Hobby-Eberly Telescope Dark Energy Experiment (HETDEX), a project to study dark energy, the mysterious force causing the universe’s rate of expansion to speed up. This survey looks back 11 billion years to determine if dark energy has changed over time.

The HET is a joint project of The University of Texas at Austin, Pennsylvania State University, Ludwig-Maximilians-Universität München, and Georg-August-Universität Göttingen.