The 0.9-meter Telescope at McDonald Observatory — commonly called “the 36-inch” — is a “light bucket.” It was designed to be used with a photometer, an instrument that measures the relative brightness of a star, and how that brightness changes over time. The mirror was made to collect as much light as possible, rather than to make detailed images. It was commissioned in the 1950s by the University of Chicago, which ran McDonald Observatory from 1932 to 1962. The telescope was completed in 1956. It was the second telescope to be completed at McDonald.

The rock that forms the dome-wall surrounding the telescope was quarried from the Eppenauer Ranch adjacent to the Observatory. The metal dome was constructed from materials left over from the 1938 construction of the 2.1-meter Otto Struve Telescope. McDonald Observatory employees built both the dome and the wall. The hydraulic platform floor inside the dome was built from a spare garage lift. 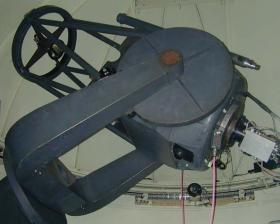 McDonald Observatory's 0.9-meter Telescope. The telescope was used for professional observations for decades. But by the time the Hobby-Eberly Telescope was completed in 1997, the 0.9-meter was starting to get old and its technology was seriously out of date. Astronomers preferred using larger and more effective telescopes. But rather than let this telescope sit and collect dust, the Observatory had another idea: Use it for public and educational programs.

These public programs are called Special Viewing Nights. For these reservation-required events, small groups of participants get to use this large research grade telescope first hand.

On these Special Viewing Nights, the group travels from the Visitors Center to the road near the summit of Mount Locke, where the 0.9-meter dome sits. The program leader gives a short tour of the night sky, with an emphasis on the major constellations. The three-hour program includes telescope views of around a dozen objects, ranging from planets, to binary stars and star clusters, to galaxies.

In addition to Special Viewing Nights, the telescope has been used for Elderhostel events and teacher professional development programs. 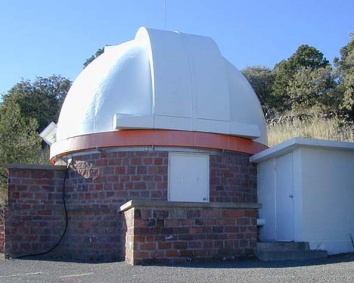 The dome of the 0.9-meter Telescope.