This small telescope owes its existence to one of its larger cousins. The 2.7-meter Harlan J. Smith Telescope was completed in the late 1960s. That telescope's mirror was made out of fused silica (Quartz), the state-of-the-art material for telescope mirrors at the time. After the central hole was cut out of this large mirror (necessary to allow incoming light to travel into its science instruments), McDonald Observatory decided to use all the costly glass that was left over. 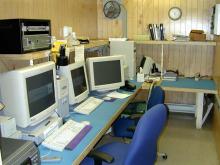 Incidentally, the second mirror created from the left-over glass from the Smith Telescope serves as the primary mirror in McDonald Observatory's Mobile Laser Ranging System.

The telescope had undergone a refit as of November 2012.

The new telescope tube, mirror box, and mount, along with ancillary systems were manufactured by OMI (Optical Mechanics Incorporated) during 2011/2012, and initially installed in the dome structure during Aug. - Sept. of 2012 by a team from OMI, and McDonald Austin/West Texas including the OS and PP staff, and Gordon Wesley from Austin.

The telescope installation, debug, and final commissioning were performed by McDonald West Texas staff between November 2012 and approximately May of 2013.  The telescope is now on the science calendar as a shared-risk resource for local operation.

The system is a hybrid, designed for local (in the dome), remote (via a network), and autonomous (robotic) operation.  It uses a distributed motion control system, including high-precision servo motors, absolute optical encoders, and multi-axis digital motion controllers on the RA/HA and DEC axis.  Both axes are steel-on-steel friction drives, utilizing a servo drive equipped with a hardened steel drive capstan, which directly engages a hardened steel drive roller.  This is a zero-backlash drive design, capable precision motion accurate to within 50nm.  The maximum slew rate is 24-radians/sec. (1375-degrees per second).

The telescope control system (TCS) is based on an open-systems solution, known as Talon.  Talon is written in C and a scripting module system used to integrate motion control devices.  The TCS supports full dome auto (the dome is encoded), planetarium-based, multi-catalog pointing (based on the open-systems XEphemeris), and uses a mesh-grid, high-precision pointing model that is continuously refined and extensible. 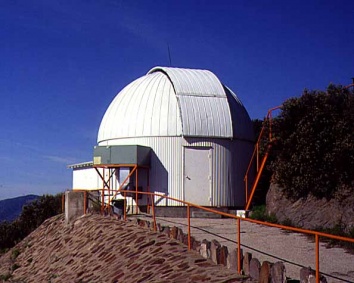 The dome of the 0.8-meter telescope.