The Sandiford Cassegrain Echelle Spectrometer is an instrument often used on the 2.1-meter Otto Struve Telescope. It is a spectrometer, which means that it spreads incoming light into its component wavelengths for astronomers to study. The light is spread by an echelle, which is a special type of diffraction grating.

Once inside CE, light must pass through a variety of optics before it is measured. First, it is directed through a narrow slit, which shapes the incoming beam of light into a very skinny rectangle. This line of light is the most convenient way to create a tidy spectrum. Mirrors reflect the light towards an echelle, which is a special type of diffraction grating. The echelle separates the light into its component colors. The separated light is then reflected through a filter expressly designed to keep different parts of the spectrum from overlapping, and finally to a charged coupled device (CCD). The CCD is a light detector that records the spectrum and sends it to a computer in digital form for astronomers to study.

CE is a high resolution instrument, meaning that it is capable of separating light into very fine divisions. High resolution allows astronomers to see more detailed properties of the objects they are studying. CE can detect light of wavelengths between 370 nm and 1100 nm very efficiently. Since its introduction as an instrument, it has been used primarily to study the spectra of different kinds of stars to determine their composition, motions, and structure.

The Sandiford Cassegrain Echelle Spectrometer was named in honor of the late Brendan Sandiford, a McDonald Observatory employee who helped develop the instrument in 1991. 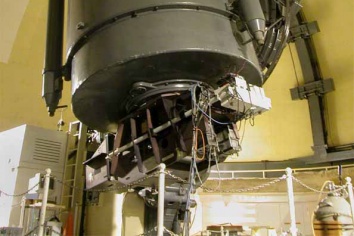