All of these instruments are located at Coudé focus. Light is collected by the telescope and reflected by four mirrors down the telescope axis and into a room known as the Coudé slit room. A pivoting mirror at the base of the telescope axis allows an astronomer to decide which spectrograph entrance slit to use. One spectrograph slit allows the incoming light to follow the 6-Foot Camera and the Long Focus Camera light path. The other spectrograph slit allows the incoming light to follow the TS21 and the TS23 light path. These light paths are inside the Coudé room, which is essentially the inside of an astronomical camera that happens to be large enough to allow people to walk around inside. It is a long room painted entirely black, and it contains many pieces of optical equipment. The optical equipment directs light from the spectrograph slits to the diffraction gratings, lenses, prisms and mirrors that make up the 6-Foot Camera, the Long Focus Camera, TS21, and TS23. At the end of the optical path, light is detected by a charged coupled device (CCD) camera.

The instruments at Coudé focus on the 2.7-m Harlan J. Smith Telescope provide the highest resolution available at McDonald Observatory. The instruments were designed for spectroscopy of the atmospheres of stars and planets, and they are most often used for this purpose.

Formerly called the Coude Spectrograph, the instrument was renamed "the Robert G. Tull Coudé Spectrograph" recently in honor of its creator. 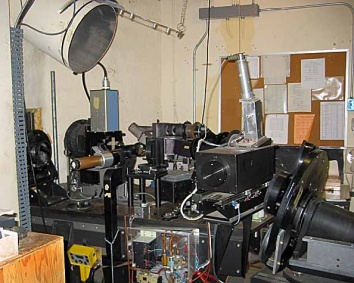