The Mitchell Spectrograph was initially known as VIRUS-P. That's because it is a prototype for VIRUS, a much larger instrument planned for an upcoming project on the Hobby-Eberly Telescope at McDonald Observatory. The installation of the Mitchell Spectrograph on the 2.7-meter Harlan J. Smith Telescope is both helping astronomers prepare for that project, and to do interesting science today.

VIRUS stands for “Visible Integral-field Replicable Unit Spectrograph.” A spectrograph takes the light from astronomical objects and breaks it down into its component wavelengths, creating a spectrum for that object. A spectrum is like a fingerprint of a star or galaxy, and astronomers can get amazing amounts of information from it: how far away something is, how fast it’s moving, what elements or compounds it contains, and how hot or cold it is.

The “R” in VIRUS stands for “Replicable.” The final VIRUS instrument will contain 145 copies of the same spectrograph, put together to make one powerful instrument. The prototype contains one copy.

That’s so astronomers and engineers can test it, and work the kinks out, before they make all the copies. This will save money and time.

The final VIRUS instrument will be used for the Hobby-Eberly Telescope Dark Energy Project. Its 145 spectrographs will be capable of simultaneously observing almost 36,000 individual pieces of the sky.

For the HETDEX project, HET & VIRUS will measure the positions in space of 10,000 galaxies every night, meaning a million galaxies in 100 nights. This survey is sufficient to constrain the scale of the universe to better than 1%, and will tell us whether “dark energy” — a mysterious force causing the universe to expand faster than expected — is a constant effect over time, or whether it evolves. The nature of dark energy has been called the biggest problem in all of science today.

The type of galaxies that HETDEX will map is very specific: the so-called “Lyman-alpha” galaxies. Right now, the HETDEX team is looking for these very galaxies in a pilot survey using the Mitchell Spectrograph on the Smith Telescope. This instrument was completed in October 2006.

They are also making VIRUS-P available for other astronomers to use, and it has attracted quite a bit of attention.

Together, VIRUS-P and the Smith Telescope make the most powerful instrument/telescope combination for a variety of studies. Its unique ability to take spectra of a large area of the sky at once allows astronomers to study light that is spread over a large region of the sky and very faint. By being able to grasp so much sky area at once, VIRUS-P can add up many very faint spectra to make one detailed spectrum. For example, this has opened up the study of the dark matter around galaxies, since one has to probe the very furthest extent of the galaxy where the light from stars is very faint. 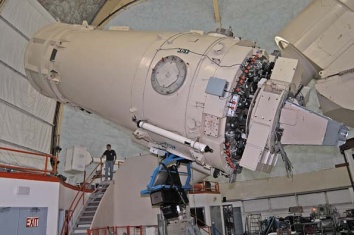