The Imaging Grism Instrument, IGI (rhymes with piggy), is an instrument built by Dr. Gary Hill and can be used at the Cassegrain focus of either the 2.7-meter Harlan J. Smith Telescope or the 2.1-meter Otto Struve Telescope. IGI is a very simple instrument that performs the following three functions:

IGI decreases the focal length by a factor of five to 4.7 meters and, hence, the f-number to 1.8.

Why would one want to reduce the focal length or f-number of a telescope? Well, there are basically two reasons: to increase the "speed" of the telescope and to change its magnification.

Also, the focal length of a telescope is directly related to the magnification; telescopes with a larger focal length have a larger magnification and a smaller field of view. If observing an object such as the Andromeda Galaxy (M31), which is large and bright, you might choose to use the focal reducer. Without the focal reducer, you will need to spend more time observing in order to make an image of the entire galaxy. Additionally, you may want to make an image of a greater region of sky, such as a cluster of very faint galaxies, so you would use IGI in its imaging and focal reducing mode.

In addition to acting as a focal reducer, astronomers can use IGI as a low-resolution spectrograph. IGI has a light collimator that makes the light rays all parallel to one another. By inserting a grism into the path of this collimated light, the light is dispersed into its spectrum of wavelengths. It's that simple; you just slip the grism into the light path and you've got a spectrograph.

IGI also has another variation in which it can be used as a type of instrument called a "polarimeter." In this mode, IGI is called the Imaging Grism Polarimeter (IGP). The observer adds another system of optics to IGI to create IGP. This addition consists of two parts: a polarizing beam splitter and a half-wave plate. The beam splitter, as the name implies, takes a beam of light and splits it into two separate paths. The wave plate rotates the polarization of the light. Together, these two create an instrument that can observe light of different polarizations from regions such as active galaxies and star-forming regions. 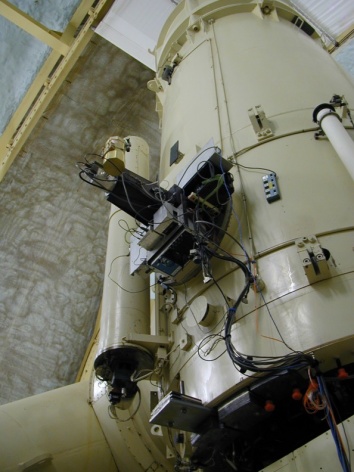