The Hobby-Eberly Telescope (HET) hosts a trilogy of spectroscopic instruments, the High-, Medium-, and Low-Resolution Spectrographs (HRS, MRS, and LRS). Of these, the HRS offers the highest resolution; that is, it can discern fine features in the spectra from astronomical sources by spreading the spectrum out more than the other spectrographs.

Because the light is more spread out, astronomers generally must observe brighter objects with the HRS than those that they might detect with LRS or MRS. However, in this sacrifice of sensitivity, the observer attains a spectral resolution that is matched by only a few astronomical instruments in the world.

In design and function, the HRS is much like the MRS. The HRS is housed in a dark, cooled room below the telescope floor which is, as described by research engineer and assistant director John Booth, a "meat locker." In fact, the room that houses the HRS and MRS is a meat locker. The HET staff found that it was less expensive to buy a commercial meat locker than to build a thermally-controlled room.

Because the HRS is not located at the telescope's prime focus like the LRS, fiber-optic lines move the light from the prime focus to the HRS in the meat locker.

The HRS is, technically, a fiber-fed cross-dispersed echelle spectrograph.

It is called "fiber-fed" because the light is delivered to the instrument via optical fibers into the entrance slit of the spectrograph.

The dispersive element is an echelle grating, a special kind of diffraction grating that gives much higher resolution than other gratings. These gratings are generally set apart from other diffraction gratings because they have much deeper and far fewer grooves cut into their surface.

The echelle is the grating of choice for high resolution spectrographs. However, with an echelle grating, you generally need another dispersing element, a grating or prism, to effectively break the spectrum into smaller pieces and stack them on top of one another. Otherwise, you'd need a really long detector, a charged-coupled device (CCD), to gather all of the spectrum.

With today's large square CCDs, it is possible to collect the data from the "stacked" spectra that are organized by the second dispersing element. This element in the spectrograph is called the cross-disperser.

Hence, the HRS is a fiber-fed cross-dispersed echelle spectrograph. 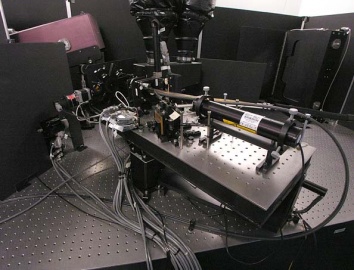