Collecting light from astronomical objects is often very difficult because people do not observe the heavens from a stationary point. As Earth turns on its axis, objects such as the Sun, Moon, and stars appear to travel though the sky. In order to compensate for this motion, many types of amateur and professional telescopes alike are designed to track the stars as they move overhead. Tracking simply involves moving the telescope in right ascension at a constant rate - this follows the rotation of the Earth, and causes the stars to appear stationary in the field of view of the telescope.

For very precise measurements, however, simply tracking on an astronomical object is not accurate enough. Factors such as refraction of light through the atmosphere at different parts of the sky, the telescope structure bending slightly differently at different positions, and tracking that doesn't follow the Earth's motion exactly all cause an astronomical object to wander in a very small field of view. To ensure that this doesn't happen, astronomers guide the telescope on the object. Guiding is simply a fine-tuning of the telescope tracking. It involves moving the telescope in the necessary direction to correct for errors not accounted for in tracking.

Guiding is usually accomplished using an instrument called a guider. A guider is a camera with a charged coupled device (CCD) or TV that records some of the incoming light that has been reflected out of the main optical path. Guider images taken every few seconds or every fraction of a second are sent to a computer and displayed for the astronomer to see. The astronomer finely adjusts the position of the telescope based on the movement of the object in the images. Even better are instruments called auto-guiders. Images from auto-guiders are sent to a computer, where they are analyzed by a computer program for object movement. If the program determines that the object has moved and the telescope should be adjusted, the computer does so. Astronomers generally like auto-guiding because it can be quite accurate, and the freedom from having to guide on an object allows them to do other things.

There are several different guiders that are used at McDonald Observatory, the most familiar ones being the Apogee guider, the Star 1 guider, the MicroLuminetics guider, the White Guider, and the Scanco guider. Each guider can be used with more than one instrument. For example, the Apogee guider is used with CoolSpec, the Large Cassegrain Spectrograph, the Imaging Grism Instrument, and the Millisecond Infrared Astrophysical Spectrometer. The Star 1 guider can be used with the Cassegrain Spectrometer es2 or the Imaging Grism Instrument, and the MicroLuminetics guider is most often used with the Sandiford Cassegrain Eschelle Spectrometer. The Coudé Spectrograph on the 2.7-m Harlan J. Smith Telescope is the sole user of the Scanco guider, and the Prime Focus Camera on the 0.8 meter Telescope also has its own unnamed guider. 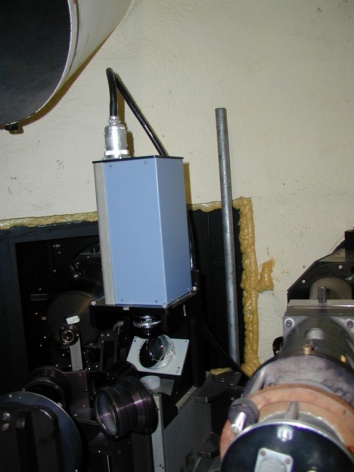