Every night, light from celestial sources streams into telescopes at observatories around the world. After passing through various instruments and optics, each beam of light is brought into focus on a detector. Light sensitive detectors are essential for studying astronomy because they record the intensity and position of the light that has traveled so far to reach us. Previous generations of astronomers were accustomed to using glass photographic plates or even their unaided eyes as detectors to study light from the night sky. However, today astronomers use detectors called Charged-Coupled Devices, or CCDs, controlled by complex electronics, to make their observations.

CCDs are made of a thin wafer of silicon which is sensitive to light, on top or bottom of which is placed a tight array of pixels. The entire detector is usually a few square centimeters in size, about the size of a nickel, and it can be as thin as a micron, or a tenth of the diameter of a human hair. Pixels are laid out on the silicon wafer in a rectangular grid pattern, usually several hundred to a few thousand on a side. In order to fit so many pixels on such a small surface, the pixels themselves must also be very small; each measures approximately 10 to 20 microns across.

The pixels act like small buckets for collecting light. When light is focused onto the CCD, photons, or particles of light, fall into the pixels and are stored there, much like raindrops would build up in buckets laid out in an open field on a drizzly day. In reality, the pixels don't store photons, but electrons. Each photon that passes through a pixel knocks an electron off of the silicon layer of the detector, and it is this electron that the pixel stores. Electrons, unlike photons, are negatively charged particles, and their negative charge keeps them trapped inside the pixels. Thus, the number of electrons that the CCD collects is directly related to the number of photons that fall onto it.

Because astronomical sources are usually very faint, astronomers allow CCDs to collect light for time intervals ranging from a fraction of a second to several hours. During this time, electrons build up in the individual pixels. The number of electrons accumulated in a particular pixel depends on how many photons have passed through it. At the end of the exposure, the entire array is read electronically to determine the number of electrons present in each pixel. This digital information, which is collected from the grid either row-by-row or column-by-column, is then sent to a computer. When digital the value for each pixel is known, the entire array of pixels forms an image! Astronomical software packages can display and save the images for astronomers to use in their research.

During observing, CCDs must be kept very cold in order for them to work properly. This is usually achieved by encasing the CCD in a dewar, which is a type of special thermos designed to hold liquid nitrogen. Liquid nitrogen is added to the dewar on a regular schedule to keep the CCD chilled down to 77 K (or –321 degrees F).

The data collection methods enabled by CCDs have revolutionized modern astronomy. Images made with CCDs are much faster to gather and much easier to manipulate than images made using previous methods, such as photographic plates. Moreover, the small size and electronic data collection capabilities of CCDs have allowed for such major advances as space-borne observatories; the Hubble Space Telescope, together with the beautiful images it sends back to earth, are a testament to the success of CCD technology.

McDonald Observatory boasts several CCDs that are used with various instruments on the 2.7-meter Harlan J. Smith Telescope, the 2.1-meter Otto Struve Telescope, and the 0.8-meter Telescope. Oftentimes, the CCDs are given names according to the company that manufactured them. For example, the TI1 CCD was made by Texas Instruments, the TK CCD was made by Tektronics, and the LF1 CCD was made by Loral Fairchild. Many of the CCDs at McDonald Observatory, such as TK3, TK4, CC1, and TI1, are shared among the instruments, but some of them, such as LF1 on the PFC, are always used on the same instrument. The CCDs are always treated with great care, because they are very expensive. Despite their cost, though, they are essential pieces of equipment for modern-day observing at McDonald Observatory. 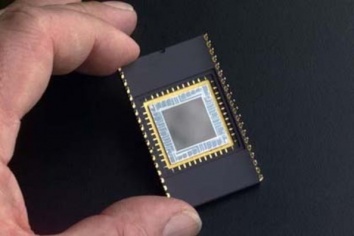