Argos is an instrument that is available to use on the 2.1-meter Otto Struve Telescope. It's a photometer, which means it measures the intensity of light received by the telescope -- usually in very short time intervals. In its initial design, which was later revised, the instrument used many phototubes (tiny glass tubes that are sensitive to light) to detect incoming photons. Because of this, it was given the name Argos in honor of the many-eyed monster from Greek mythology. Instead of phototubes, however, Argos uses a charged coupled device (CCD) to make observations of the night sky.

Argos is a prime focus instrument, meaning that it is located at the open end of the Otto Struve Telescope. Light that enters the telescope is reflected off the 2.1-meter diameter primary mirror and is brought into focus at the top of the telescope tube. The instrument is situated in the focal plane of the light so that the CCD intercepts the light when it is in focus. The field of view of the detector measures 2.8 arc-minutes across, which is roughly the size of a tennis ball seen from a mile away.

Unlike most astronomical instruments, Argos doesn't have a shutter to open or block the flow of light onto the CCD. Instead, the CCD is divided in half, and images are collected using the so-called "frame transfer method." Initially, the first half of the CCD collects light for a given exposure time. When the time has elapsed, the data from that half of the microchip is instantly transferred to the second half, freeing the first half to again start collecting data. While the first half is collecting more data, the second half reads the transferred set of data out to a computer. The entire process happens very quickly, as exposure times can be as small as one second, and it continues for as long as the astronomer needs to observe.

There are several filters available for use with Argos, which allow astronomers to study specific wavelengths of light from astronomical sources. Filters that are commonly used with the instrument include a special blue filter and standard BVR filters. It is possible to mount two filters into Argos at one time, so that the astronomer may switch between them at will. Because the entire slide mount must be removed to change filters, this makes it more convenient for astronomers who need more than one filter for their observations.

Argos is a relatively young instrument, as it was finished in June of 2001 and commissioned in November of 2001. Despite its young age, however, Argos has helped astronomers at McDonald Observatory discover 22 pulsating white dwarf stars to date. 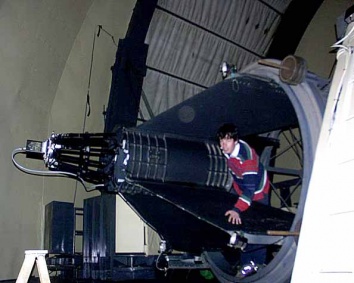