Astronomy professor J. Craig Wheeler has never been a stranger to science. Even before he began to study astronomy, he was certainly influenced by his father's physics-related career. "My father followed various defense industry jobs," he says. "We lived in Boulder, Colorado when he was working on the first thermonuclear bomb."

Later, his family moved to Idaho to be close to a nuclear reactor testing station. "Idaho was an interesting environment," he says. "Very rural in some sense, but very scientific in another. It was a real cross cultural sort of thing, with potatoes and a nuclear reactor."

Craig decided to study astronomy at just the right moment in time. Funding for science was at an all time high after World War II and the launch of Sputnik, and looking back, Craig realizes that he was, as he says, "riding that post-war wave." After receiving his doctorate at The University of Colorado, he worked as a postdoctoral researcher at the California Institute of Technology, and later was an assistant professor at Harvard University. "I can look back now and see that in many ways I was very, very fortunate," he says. "Caltech was a great place to be a postdoc. There were all sorts of science going on, and there was just this intellectual ferment in the air. I've just been immensely lucky. It was really a great boost to my career."

"One mind-bending idea after another."

One of the greatest perks to being an astronomer, according to Craig, is "getting to write â€˜Astrophysicist' on my IRS tax return. â€˜I am an astrophysicist.' That just gets me every time!" Craig also likes being an astronomer because he enjoys finding out about new ideas in the field. "I'm a new idea junkie," he says. "I feed on new ideas. Lots of fields have new ideas, but astronomy is just one mind-bending idea after another!"

"I'm just not an observer."

Unlike most astronomers, Craig is never at the telescope. "I only observed with a telescope one time," he remembers. "It was cloudy for three days. And that was the end of that. I'm just not an observer." Instead, Craig is a theorist, meaning that while he plans and uses telescope observations, he does not depend on them for his work. It is also helpful that he studies supernovae, which are very unpredictable. Because astronomers never know when one may happen, supernova observations are usually made by whichever astronomer happens to be at the telescope at the time.

When he's not doing astronomy, Craig is probably writing about it! He has written a popular book: Cosmic Catastrophes: Supernovae, Gamma-Ray Bursts, and Adventures in Hyperspace; as well as a science fiction novel, The Krone Experiment. As luck would have it, Craig's son Rob is in the process of turning The Krone Experiment into a movie. And currently, Craig is in the process of writing a sequel called Krone Ascending. "If I weren't an astronomer, I'd probably be a writer of some kind," he says. "It's something I discovered too late to make it into a career, but I do enjoy writing."

Craig is a member of The University of Texas Academy of Distinguished Teachers. He lives in Austin with his wife of 36 years. Their older son, Diek, is a neurobiologist at The University of Pittsburgh, and their younger son, Rob, is a filmmaker in Austin. 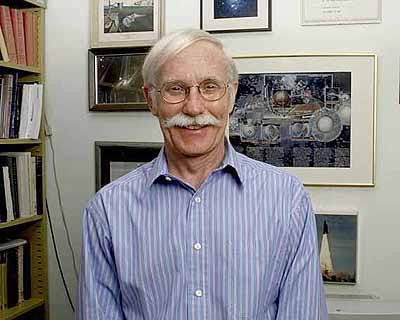