If faculty member Karl Gebhardt wasn't an astronomer at the University of Texas, he would want to be a construction worker. In fact, he worked in construction while he was in graduate school, landscaping and building houses. What's the appeal? "You get to drive really big trucks!" he grins. Currently, this Associate Professor of Astronomy still likes to spend his free time working on his house and gardening. "We grow a lot of flowers and vegetables," he says. "Texas is a good place for that."

"Tossing a lot of good books at me" Karl grew up in Rochester, New York, where his mother worked as a hospital administrator. During his grade school years, his favorite teacher was Mrs. Tomoanovich who taught 11th grade English. "I appreciated her," he remembers, "for tossing a lot of good books at me." Among other works, the class read books by Herman Hess and Absalom, Absalom! and As I Lay Dying by William Faulkner. "She had a good style of teaching, and the books had a big impact," he says.

"One person can make an difference." Although he started out studying physics in graduate school, Karl was drawn to astronomy in part because of its personal nature. While research in physics often involves hundreds of scientists working together on the same project, Karl saw astronomy "as a way where one person can make an difference." What's more, compared to the many people who work in physics, the astronomy community is rather small. As Karl says, "It's a small enough group in astronomy that you tend to know most of the people, and they're spread throughout the world. So pretty much anywhere you go in the world, there's someone you know and have interacted with. Astronomers tend to be pretty nice people so that works out quite well."

"A common misconception" Like a growing number of professional astronomers, Karl rarely sees a telescope anymore. Most of the telescopes he uses, such as the Hobby-Eberly Telescope at McDonald Observatory and the Hubble Space Telescope, are queue scheduled. Instead of having to be present at the telescope to make his observations, Karl simply waits for the telescope staff to make the observations for him. Data collected on his behalf are usually transmitted to him electronically, so he never even has to leave his office. The idea that he's spending nights in a telescope dome is, as he says, a "common misconception." "People think it's weird," he says, "but it's pretty typical." 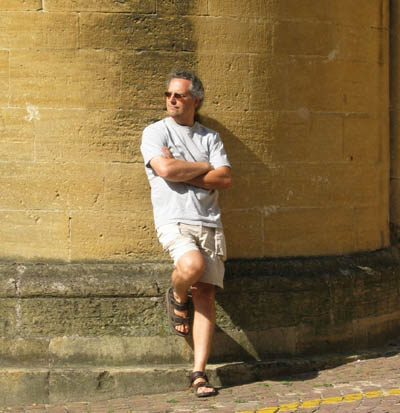