Niv
Institution:
UT-Austin
I just happened to end up in astronomy.

"I got interested in astronomy during my studies of physics," Niv Drory says. "I had a strong interest for astronomy as a teenager, but when I started studying physics, I wasn't actually sure I would end up as a researcher in astronomy. I just happened to end up in astronomy."

"An international and interesting environment."

Now that he is a professional astronomer, it's not only a fascination with the subject matter that keeps Niv interested. "The most reward I get out of astronomy is being able to work in a very international and interesting environment," he says. "It's actually more of a reason for me than the science itself, because there are interesting jobs all over the place. It's the people."

"I have always loved music."

When he's not spending time at work in front of his office computer, Niv likes to play "all kinds of sports," he says. These include running, basketball, and volleyball, among others. He also likes to cook Mediterranean and Asian food, and he enjoys music. "I have always loved music," he says, "both listening to and playing music." He plays classical and rock guitar, and he usually listens to both classical and pop when he's out at McDonald Observatory. Niv also likes movies, "literature in general," and biology, which he says he finds fascinating.

Niv was born in Haifa, Israel, and he and his parents moved between Germany and Israel several times when he was younger. They finally settled in MÃ¼nich, where Niv attended high school and later college and graduate school. After finishing his Ph.D., Niv came to Texas as a postdoctoral researcher with The University of Texas at Austin. Following that, Niv returned to Germany and is now with the Max Planck Institute for Extraterrestrial Physics in Garching, near Munich. 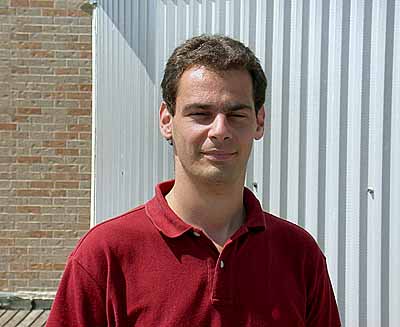