Twelve-year old Anita Cochran visited Brookhaven National Laboratory near her hometown of New York City. Although she had been encouraged to explore science by her father and several teachers, Anita remembers this visit as a pivotal point in her aspiration to be a scientist. She had become fascinated and enamored by the simple fact that people can look at the world and deduce some order. In contrast, she recalls her older brother's response to the same trip, "Oh, I remember that trip. It was the most boring thing ever." Anita sheepishly grins---"He's not a scientist."

Anita attended Cornell University in Ithaca, New York, where she satiated her desire to study the physical sciences. As an undergraduate student there, she focused on physics, but, fortunately, her advisor required that she take classes outside of the strict study of physics. "I didn't have any intention of going into astronomy," says Anita, but, after enrolling in an astronomy class, "I was hooked." Indeed, she would then move on to the land of "Hook em Horns," the University of Texas at Austin, which came in high regard with her Cornell mentor,Joe Veverka, because of the research environment and "lots of good biergartens."

"We went there bunches of times."

As a young graduate student, Anita was to begin under the advisement of Larry Trafton. Eager to work, Anita knocked on Larry's door in prospect of a project. He sent his new student to his postdoctoral researcher, Bill Cochran. Two weeks later, these two astronomers went together on a date. Where do astronomers go on their first date? Well, Bill and Anita enjoyed going to the Armadillo World Headquarters, a music hall in South Austin. In fact, "We went there bunches of times." Two years later, Bill and Anita were married and have recently celebrated their twenty-fifth wedding anniversary.

As a graduate student during the 1970's, Anita found herself to be one of few women in the department. "Certain people were inhospitable at the time," remembers Anita, but the department, in general, has become more open to women. "In those days, it was a major event to get a new woman in the department, but, today, there are many more women in the program." Today, Anita says of the situation for women in astronomy, "It is really different."

During her tenure her as a researcher, Anita has spent many years studying bodies in our solar system. Mostly, she enjoys exploring comets, balls of ice and dust that orbit our Sun, but, occasionally, she likes to observe asteroids from the telescopes at McDonald and elsewhere. Anita has also been part of the CONTOUR mission (Comet Nucleus Tour) a space project that was intended to visit Comet 2P/Encke and study its makeup. Unfortunately, this space observatory was lost just one month after launch. "It was a very bad day," sighs Anita as she remembers hearing of the explosion.

In their spare time, Anita and Bill enjoy many things together. The two are avid bicyclists and find a week incomplete without at least a few hours out on the road together. They often sponsor departmental participation in the many charitable rides and have even formed an impromptu team, Team Astro, whose motto reads, "Nuclear Powered, Stellar Performers." This couple also enjoy square dancing every Tuesday night with their fellow square dancers. Both have pursued this interest since 1984 and are considered advanced in their skill of this art. Further, the name of Anita's computer, Barolo (a region in Italy known for its wine) reflects her fancy for good wines. "Barolos tend to be really big, massive wines---chewy," says Anita. Finally, although she doesn't own a dog, Anita is a godmother to many of her friends' pets. She speaks fondly of Skye, a white Aussie; Sox, a friendly beagle; Honey Girl, a sweet terrier-like dog; and Sarah, a dog, dear to Anita, who just recently passed away. 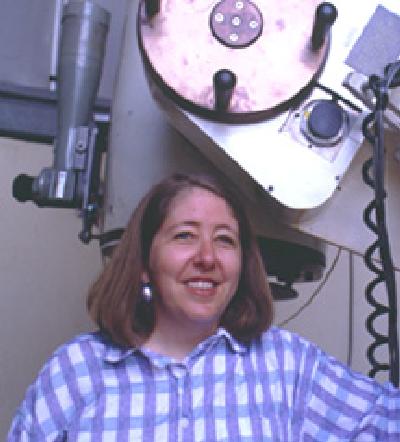