AUSTIN — Nobel laureate Steven Weinberg, a professor of physics and astronomy at The University of Texas at Austin, has died. He was 88.

One of the most celebrated scientists of his generation, Weinberg was best known for helping to develop a critical part of the Standard Model of particle physics, which significantly advanced humanity’s understanding of how everything in the universe — its various particles and the forces that govern them — relate. A faculty member for nearly four decades at UT Austin, he was a beloved teacher and researcher, revered not only by the scientists who marveled at his concise and elegant theories but also by science enthusiasts everywhere who read his books and sought him out at public appearances and lectures.

“The passing of Steven Weinberg is a loss for The University of Texas and for society. Professor Weinberg unlocked the mysteries of the universe for millions of people, enriching humanity’s concept of nature and our relationship to the world,” said Jay Hartzell, president of The University of Texas at Austin. “From his students to science enthusiasts, from astrophysicists to public decision makers, he made an enormous difference in our understanding. In short, he changed the world.”

“As a world-renowned researcher and faculty member, Steven Weinberg has captivated and inspired our UT Austin community for nearly four decades,” said Sharon L. Wood, provost of the university. “His extraordinary discoveries and contributions in cosmology and elementary particles have not only strengthened UT’s position as a global leader in physics, they have changed the world.”

Weinberg held the Jack S. Josey–Welch Foundation Chair in Science at UT Austin and was the winner of multiple scientific awards including the 1979 Nobel Prize in physics, which he shared with Abdus Salam and Sheldon Lee Glashow; a National Medal of Science in 1991; the Lewis Thomas Prize for the Scientist as Poet in 1999; and, just last year, the Breakthrough Prize in Fundamental Physics. He was a member of the National Academy of Sciences, the Royal Society of London, Britain’s Royal Society, the American Academy of Arts and Sciences and the American Philosophical Society, which presented him with the Benjamin Franklin Medal in 2004.

In 1967, Weinberg published a seminal paper laying out how two of the universe’s four fundamental forces — electromagnetism and the weak nuclear force — relate as part of a unified electroweak force. “A Model of Leptons,” at barely three pages, predicted properties of elementary particles that at that time had never before been observed (the W, Z and Higgs boson) and theorized that “neutral weak currents” dictated how elementary particles interact with one another. Later experiments, including the 2012 discovery of the Higgs boson at the Large Hadron Collider (LHC) in Switzerland, would bear out each of his predictions.

Weinberg leveraged his renown and his science for causes he cared deeply about. He had a lifelong interest in curbing nuclear proliferation and served briefly as a consultant for the U.S. Arms Control and Disarmament Agency. He advocated for a planned superconducting supercollider with the capabilities of the LHC in the United States — a project that ultimately failed to receive funding in the 1990s after having been planned for a site near Waxahachie, Texas. He continued to be an ambassador for science throughout his life, for example, teaching UT Austin students and participating in events such as the 2021 Nobel Prize Inspiration Initiative in April and in the Texas Science Festival in February.

“When we talk about science as part of the culture of our times, we’d better make it part of that culture by explaining what we’re doing,” Weinberg explained in a 2015 interview published by Third Way. “I think it’s very important not to write down to the public. You have to keep in mind that you’re writing for people who are not mathematically trained but are just as smart as you are.”

By showing the unifying links behind weak forces and electromagnetism, which were previously believed to be completely different, Weinberg delivered the first pillar of the Standard Model, the half-century-old theory that explains particles and three of the four fundamental forces in the universe (the fourth being gravity). As critical as the model is in helping physical scientists understand the order driving everything from the first minutes after the Big Bang to the world around us, Weinberg continued to pursue, alongside other scientists, dreams of a “final theory” that would concisely and effectively explain current unknowns about the forces and particles in the universe, including gravity.

Weinberg wrote hundreds of scientific articles about general relativity, quantum field theory, cosmology and quantum mechanics, as well as numerous popular articles, reviews and books. His books include To Explain the World, Dreams of a Final Theory, Facing Up, and The First Three Minutes. Weinberg often was asked in media interviews to reflect on his atheism and how it related to the scientific insights he described in his books.

“If there is no point in the universe that we discover by the methods of science, there is a point that we can give the universe by the way we live, by loving each other, by discovering things about nature, by creating works of art,” he once told PBS. “Although we are not the stars in a cosmic drama, if the only drama we’re starring in is one that we are making up as we go along, it is not entirely ignoble that faced with this unloving, impersonal universe we make a little island of warmth and love and science and art for ourselves.”

Weinberg was a native of New York, and his childhood love of science began with a gift of a chemistry set and continued through teaching himself calculus while a student at Bronx High School of Science. The first in his family to attend college, he received a bachelor’s degree from Cornell University and a doctoral degree from Princeton University. He researched at Columbia University and the University of California, Berkeley, before serving on the faculty of Harvard University, the Massachusetts Institute of Technology and, since 1982, UT Austin.

He is survived by his wife, UT Austin law professor Louise Weinberg, and their daughter, Elizabeth. 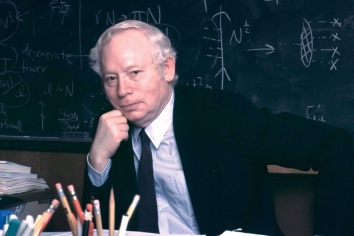