You Can Help Decode the Universe!

Would you like to help astronomers understand more about the universe? McDonald Observatory astronomers are trying to learn more about dark energy — the mysterious force causing the universe to expand faster and faster over time. And now there is a fun and easy way anyone can help with their research, using a smartphone or computer.

Here’s how Dark Energy Explorers works: After reading a brief tutorial, users look at astronomical images and classify the objects they see as either nearby or distant. Nearby objects are most likely stars or nearby galaxies, and distant objects are usually distant galaxies. And that’s it! Once trained, users can classify a lot of galaxies quickly, by swiping left or right on their phone. The app has joking been called “Tinder for galaxies.”

The images to be classified are from the Hobby-Eberly Telescope at McDonald Observatory, and were taken as part of the HET Dark Energy Experiment (HETDEX). This massive research project is designed to reveal if dark energy changes over time, or if it’s constant. Once astronomers understand how dark energy behaves, they will be well on their way to figuring out exactly what it is.

To do that, astronomers need a huge sample of distant galaxies to study. That’s what HETDEX is — a massive survey of a million distant galaxies using one of the largest telescopes in the world.

Once the telescope observations are in hand, there’s a problem. The telescope records everything in its field of view, but the team only wants distant galaxies for this study. Somehow, they have to sort their pictures of astronomical objects into ones that are going to be useful for the study and remove the rest. With millions of pictures, it’s a mammoth task.

And computers aren’t that good at it. The human eye is better at visual classification. That’s where you come in! The classifications by users of Dark Energy Explorers will feed into HETDEX.

The app now has about 3,000 volunteers. Collectively, they have done 950,000 galaxy classifications. Their work has cut down the time HETDEX astronomers spend on this task by 90%. With your help, astronomers can concentrate their energies on the toughest classifications.

To get started, create your free account on Zooniverse first and then select Dark Energy Explorers from their list of projects. (If you don't create an account, your work won't be saved!)

The project has no specified end date — it will run until HETDEX runs out of data. With 15 million classifications needed, that won’t be any time soon. 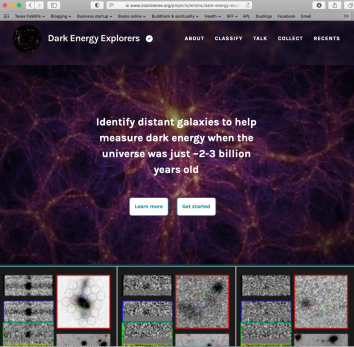