The Universe Doesn’t Stop for the Pandemic

McDonald Observatory operated the only large optical telescope in the world that stayed online through the first wave of the COVID-19 pandemic, keeping watch under the skies.

Under one of the darkest skies in the world, in the Davis Mountains of West Texas, a telescope operator at the McDonald Observatory walks alone under the bright stars toward the massive Hobby-Eberly Telescope. Sitting inside the dome and communicating over the internet with their counterparts back in Austin, astronomers punch coordinates into the control panel and guide the huge telescope as it probes distant galaxies and black holes.

“We are the observers. We are keeping the night watch,” says Taft Armandroff, director of The University of Texas at Austin’s McDonald Observatory. “If an unusual astronomical phenomenon happens in the Northern Hemisphere, we will be able to get on it fast. We don’t want to be blind.”

While industries around the world have had to shut down or face extreme hardships to adapt to changing protocols, the McDonald Observatory has stayed open for research. In fact, it is the only major optical astronomical observatory in the world to operate continuously during the pandemic.

The observatory has been able to continue with large projects like the Hobby-Eberly Telescope Dark Energy Project (HETDEX), which is studying the mysterious force causing the expansion of the universe to speed up, and the Habitable Zone Planet Finder (HPF), which is searching for Earth-sized planets with atmospheres. If the observatory had shut down during the spring, these projects could have been set back more than a year.

The observatory is on top of two mountains: Mount Fowlkes and Mount Locke. The location was chosen 85 years ago because of its high elevation and optimal viewing conditions. It also utilizes the surrounding ranch and pasture lands to make frequent access to the telescopes more accessible. “McDonald was originally developed as a little city. We have about 50 staff that live on-site. They can walk to work. They don’t need to fly or take public transit,” Armandroff said. “There is a long tradition in astronomers traveling to the telescope. This was a different approach.” It is rare to have this many full-time staff members working at a remote telescope location, he said.

The second reason for the observatory’s continuing operation is that researchers, most of whom are not at the observatory, are well connected. Before coming to West Texas, Armandroff was the director at the Keck Observatory in Hawaii. That observatory is built on the summit of a dormant volcano. Telescopes as remote as those at Keck are a challenge for scientists to reach. When Armandroff moved to McDonald, he and his team worked to increase accessibility for off-site researchers. Before the pandemic hit, they had already developed online protocols including software adaptations, permissions and security to allow for more collaboration.

Being ahead of the game for remote research, McDonald Observatory is setting a new standard for astronomical observation. As other observatories around the world are coming back online, they are looking to McDonald as a model for accessibility during a time when human contact is a health risk.

“Everyone has been pitching in to overcome the situation. We are trying to share as much as possible to teach people,” Armandroff said. Today faculty members, students and partner researchers can review telescope data from their couches at home. Armandroff sees a silver lining to being pushed further into remote research. “This situation is making us more accessible. I am really proud of our people for figuring out how to make this work.” 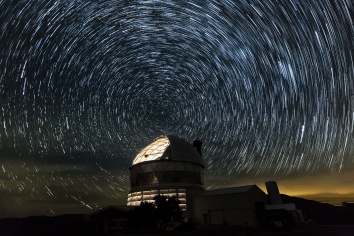