GMTO Corporation, the organization managing the development of the Giant Magellan Telescope (GMT) on behalf of its U.S. and international founders, has signed a contract with MT Mechatronics and Ingersoll Machine Tools to design, build and install the telescope’s precision steel structure. The GMT, of which The University of Texas at Austin is a founding partner, is a 24.5-meter (80-ft) diameter next-generation giant optical-infrared observatory that will explore the frontiers of astronomy, including seeking to answer one of humanity’s most pressing questions: “Are we alone?” The GMT will study the atmospheres of planets orbiting stars far from our solar system to search for signs of biochemistry.

“The signing of this very important contract is a critical step in the journey toward Texas astronomers using the GMT to answer some of the largest questions about the universe and our origins,” said Dr. Taft Armandroff, director The University of Texas at Austin McDonald Observatory and Vice Chair of the GMT board of directors. The University is a founding partner of the GMT.

MT Mechatronics of Mainz, Germany, and Rockford, Illinois-based Ingersoll Machine Tools, part of the Italian Camozzi Group, will design and manufacture the 1,800-ton precision mechanism, known as the “telescope structure” that will hold the GMT’s optics and smoothly track celestial targets as they move across the sky. The telescope structure will be designed by MT Mechatronics and manufactured, assembled and tested by Ingersoll before being shipped to, and installed at, the GMT observatory site high in the remote Chilean Andes.

“Manufacturing the telescope structure is one of the biggest steps we will take on our journey to building the Giant Magellan Telescope,” said Dr. Shelton, GMTO President.

The telescope structure will hold the GMT’s seven giant mirrors in place as they bring light from distant stars and galaxies to a focus so it can be analyzed by scientific instruments mounted deep inside the telescope. The mirrors, the largest in the world, are made at the University of Arizona’s Richard F. Caris Mirror Lab. When in operation, the telescope structure, complete with mirrors and instruments, will weigh 2,100 tons but will float on a film of oil just 50 microns (2 one-thousandths of an inch) thick – allowing it to move essentially without friction as it compensates for Earth’s rotation, tracking celestial bodies in their arc across the sky. With its unique design, the GMT will produce images that are 10 times sharper than those from the Hubble Space Telescope in the infrared region of the spectrum.

“Being a part of an endeavor with objectives as distinguished as the Giant Magellan Telescope’s is compelling for MT Mechatronics and we’re eager to support the GMT on its quest to answer the deepest questions in astronomy,” said Thomas Zimmerer, Senior Vice President, Business Development Sales & Marketing, Product Development, MT Mechatronics. “We look forward to collaborating with GMTO over the next decade to bring the telescope’s massive structure to fruition.”

“We are happy to work with GMTO and MTM to create this unique tool for the study of new worlds. The project honors and motivates all of us at Ingersoll,” said Lodovico Camozzi, CEO of Camozzi Group. “It will be a special day when the GMT’s telescope structure is completed and placed in service in Chile,” said Chip Storie, CEO of Ingersoll Machine Tools.

MT Mechatronics has over 50 years’ experience with telescopes, beginning with the Parkes Radio Telescope in Australia. It was part of a European consortium constructing the European Atacama Large Millimeter/submillimeter Array (ALMA) telescope antennas and was the mount designer for the Daniel K. Inouye Solar Telescope (DKIST) in Hawaii.

Since its inception in 1891, Ingersoll Machine Tools Inc. has been an iconic name in the milling machines sector, successfully serving the defense sector and then the newborn aeronautics and aerospace industry. Ingersoll has many decades of experience with manufacturing precision steel structures, including recently partnering with MT Mechatronics on the construction of the DKIST telescope mount.

The contract between GMTO, MT Mechatronics and Ingersoll Machine Tools will involve nine years of work and 1,300 tons of structural steel, and the structure is expected to be delivered to Chile at the end of 2025 and be ready to accept mirrors in 2028.

The mount contract completes another significant milestone for GMTO in 2019. In March, the excavations for the foundations of the telescope’s pier and enclosure were finished, and in July the second of GMT’s seven primary mirror segments was completed and shipped to temporary storage. Casting of the sixth primary mirror segment at the University of Arizona is expected to begin in mid-2020.

About the Giant Magellan Telescope
The Giant Magellan Telescope is a next-generation ground-based telescope that promises to revolutionize our understanding and view of the universe. The GMT is poised to enable breakthrough discoveries in cosmology, the study of black holes, dark matter, dark energy, and the search for life beyond our solar system. The telescope’s primary mirror combines seven 8.4-meter (27 feet) diameter circular segments to form an effective aperture 24.5 meters in diameter. The GMT will be located at Las Campanas Observatory in Chile’s Atacama Desert and the project is the work of a distinguished international consortium of leading universities and science institutions. Funding for the project comes from the partner institutions, governments and private donors.

About MT Mechatronics
MT Mechatronics, located in Mainz, Germany, provides global services as prime contractor for design, development, system integration, commissioning, training, maintenance and operations for communication and deep space antennas, radio and optical telescopes, mechatronic equipment for research institutions, launching facilities for the European space program and large medical systems for the next generation of particle cancer therapies. MT Mechatronics is a 100% subsidiary of the German OHB group. OHB SE is a leading European space and technology group with more than 35 years of experience in developing and executing innovative space technology systems and projects.

About Ingersoll Machine Tools
Ingersoll Machine Tools (IMT) is a global leader in the development of advanced machine tools for the world’s aerospace, transportation, energy and heavy industries. It is located in Rockford, Illinois, US and has about 200 employees. For the aerospace industry, Ingersoll excels in building machines to produce component parts and large structures made of titanium, aluminum, other metals. Ingersoll pioneered the automatic fiber placement and the automatic tape laying technologies for composite manufacturing and became one of the leaders for this market. The expertise, methodologies and techniques acquired in developing composite manufacturing allowed Ingersoll to enter the additive manufacturing sector. IMT is part of the Camozzi Group, a global leader in the production of components and systems for industrial automation, which also operates in a variety of other sectors, ranging from machine tools to textile machinery and provides many solutions involving the processing of raw materials. The Group creates innovation for its customers, in a process of development towards smart manufacturing. It is present in 75 countries worldwide with 30 subsidiaries, it has 2600 employees, 5 operating divisions and 18 production sites. 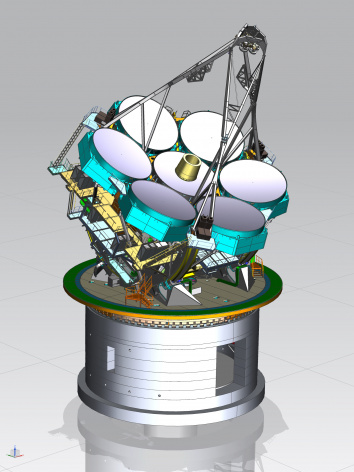