Sandy Wood, the popular and charismatic announcer of the StarDate radio program, is retiring after 28 years on the air. Her final episode will air July 16.

StarDate is the longest running nationally syndicated science program on American radio. Produced by The University of Texas at Austin’s McDonald Observatory, the program began in 1978. It brings a daily two-minute message of astronomy and skywatching to 2.3 million weekly listeners via more than 300 stations across the country. Wood took over from original announcer Joel Block after the program’s first dozen years.

“Since 1991 I’ve been with you every day, telling you about the wonders of the universe,” she says at the end of the July 16 episode. “Recent health problems, though, have left me unable to continue, so this is my final episode. My thanks for all of the support from our StarDate audience — the best in the universe!”

StarDate producer Damond Benningfield has worked with Wood since her original audition. “This really breaks my heart,” Benningfield says. “Not only is she an amazing announcer, she’s one of the kindest and most thoughtful people I’ve ever known. She’s also a hoot, so our recording sessions are probably going to be a lot duller without her.”

Wood’s first broadcast aired September 16, 1991, and she recorded a total of 10,166 episodes. She also recorded several podcasts for McDonald Observatory projects, and she narrated videos that play at the observatory’s Frank N. Bash Visitors Center and other venues at the Fort Davis campus, as well as on various web sites.

“I very much appreciate Sandy Wood’s dedicated service to McDonald Observatory. Her enthusiastic and consistent delivery of astronomy news for StarDate has built a large and committed audience of astronomy enthusiasts,” said McDonald Director Taft Armandroff. “As I travel the country and speak with fans of astronomy and The University of Texas, there are always questions and good wishes for Sandy Wood and StarDate.”

Wood has been a broadcaster since the 1960s, serving as a radio DJ and talk-show host, and voicing programs and commercials for local, regional, and national clients, including NASA.

The StarDate radio program will continue with a new announcer. The producers expect to introduce the new host of StarDate in the coming weeks. 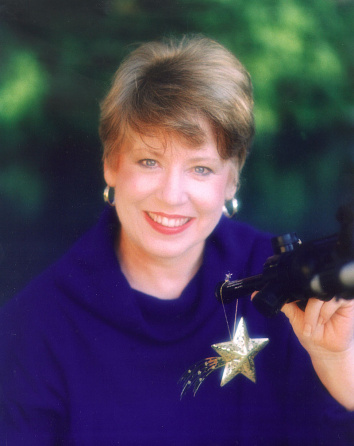