Thousands of Stars Observed Turning into Crystals for the First Time

AUSTIN, Texas — The first direct evidence of crystallized white dwarf stars has been discovered by an international team of researchers that includes an astronomer at The University of Texas at Austin. Predicted half a century ago, the direct evidence of these stars will be published tomorrow in the journal Nature.

Observations have revealed that these stars have a core of solid carbon and oxygen due to a phase transition during their lifecycle, similar to water turning into ice. This phase transition slows their cooling in multiple ways, making them potentially billions of years older than previously thought.

The discovery, led by Pier-Emmanuel Tremblay of the U.K.’s University of Warwick, is largely based on observations taken with the European Space Agency’s Gaia satellite.

Almost all stars end up as white dwarfs, and some of them are among the oldest stars in the universe. They are useful to astronomers because their predictable cooling rate allows them to be used as cosmic clocks to estimate the ages of groups of stars. They are the leftover cores of red giant stars, after these huge stars have died and shed their outer layers. They are then constantly cooling as they release their stored-up heat over billions of years.

The Gaia satellite has enabled the selection of a sample of white dwarfs with precise luminosities and colors that is significantly larger and more complete than any previous survey. For the study, the team selected 15,000 white dwarfs within about 300 light-years of Earth.

White dwarfs get fainter and redder as they cool, which leads to a predictable distribution of white dwarfs in a plot of brightness versus color. The astronomers identified a pile-up in this plot, an excess in the number of stars at specific colors and luminosities. When compared with evolutionary models of white dwarfs, the pile-up strongly coincides with the phase in their development in which latent heat is predicted to be released in large amounts, resulting in a slowdown of their cooling process. It is estimated that in some cases these stars have slowed their aging by as much as 2 billion years.

Bart Dunlap, a postdoctoral fellow with UT Austin’s Wootton Center for Astrophysical Plasma Properties, working with JJ Hermes, made the discovery independently of the Warwick team and later joined forces with Tremblay. Hermes, a former UT graduate student, is now an assistant professor at Boston University.

“More than 50 years ago, Hugh Van Horn, an astronomer at the University of Rochester, predicted that we should see a crystallization sequence because of a slowdown in cooling when white dwarfs crystallize, but at the time, the data weren’t good enough to check this prediction,” Dunlap said. “Gaia finally made it possible to see what he predicted, and it really pops out in the data.”

Just as liquid water releases extra energy when it changes into ice — this energy is known as latent heat — the dense plasmas in the interiors of white dwarfs were predicted to release enough energy to noticeably slow their trek toward cool, faint stellar embers.

“All white dwarfs will crystallize at some point in their evolution, although more massive white dwarfs go through the process sooner,” said Tremblay, who led the study. “This means that billions of white dwarfs in our galaxy have already completed the process and are essentially metallic crystal spheres in the sky.”

This includes our own sun, which will become a crystal white dwarf in about 10 billion years.

Crystallization is the process of a material becoming a solid state in which its atoms form an ordered structure. Under the extreme pressures in white dwarf cores, atoms are packed so densely that their electrons become unbound, leaving a conducting electron gas governed by quantum physics, and positively charged nuclei in a fluid form. When the core cools to about 10 million degrees, the dense carbon oxygen plasma is cool enough that the fluid begins to solidify, forming a crystalline core at its heart.

“These results are really telling us a lot about the amount of pent-up energy these stars can release while cooling off,” Dunlap said.

The astronomers say they should have access to even better data from Gaia by 2021. 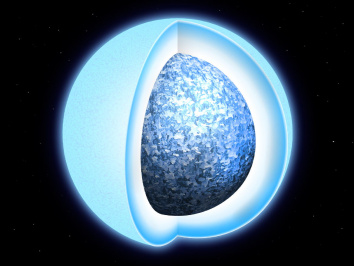