AUSTIN — In findings published today in The Astrophysical Journal, University of Texas at Austin astronomers report that they have stumbled on an extraordinary galaxy that may corroborate a recently contested theory about dark matter.

Dark matter is matter that does not give off any light, but is detectable by its gravitational pull on other matter. It was first discovered in the 1970s in studies of spiral galaxies, whose outer regions rotated too fast only to be driven by the visible stars and gas in those regions. Astronomers reasoned there must be more mass that is unseen. Decades of galaxy observations have shown that almost all galaxies contain huge quantities of this “dark matter,” and that, in fact, there is about five times as much dark matter as there is normal, visible matter in the universe.

However, a few recent studies have indicated that some galaxies don’t follow the same pattern as the “dark matter-rich” galaxies found since the 1970s. These studies showed a handful of galaxies seen around 10 billion years ago do not contain the expected quantity of dark matter. This could mean that galaxies at that time didn’t have much dark matter but gained it later, at some point in the past 10 billion years. If that’s the case, it would challenge our fundamental understanding of how galaxies form.

Now UT Austin graduate student Patrick Drew and his advisor, professor Caitlin Casey, have found a very distant galaxy that appears rich with dark matter, exactly as expected from long-held theory. Because this galaxy is 9 billion light-years away, it tells us that some galaxies do already contain quite a bit of dark matter in the distant past. The serendipitous finding appears to contradict the other controversial findings of galaxies with little dark matter content.

Drew‘s team studied this galaxy while they were using the Keck Telescope in Hawaii for a survey of the most extreme star-forming galaxies in the universe, the so-called “dusty star-forming galaxies.” They were not intending to study dark matter at all — rather, they sought to understand why these galaxies produce so many stars so rapidly.

But one of their galaxies surprised them, and sent their work off into a new direction.

Because of the random angle at which the galaxy DSFG850.95 was studied with the telescope, the data provided an extremely detailed record of the speed of the galaxy’s rotation from the center of the galaxy all way out to its far reaches. Called a “rotation curve,” this measurement is just what astronomers use to determine the amount of dark matter in a galaxy.

They showed this data to Susan Kassin, a colleague at the Space Telescope Science Institute. Kassin, an expert on such measurements of rotation curves, immediately recognized that they had found something extraordinary: This galaxy, seen 9 billion years ago, contains all the expected dark matter that theory predicts.

This is in contrast to a 2017 study in Nature that claimed that galaxies at this cosmic epoch, 10 billion years ago, “might not have as much dark matter, and that they’re fundamentally different to galaxies in the present-day universe,” Casey said. “The galaxy we found is a clear counter-example of that, where it seems to have dark matter behaving in the normal way, as it does in the present-day universe.”

The bottom line, Drew says is “this galaxy does what’s expected of galaxies like it and it is the first solid confirmation that what happens in these galaxies in the current-day universe is the same as what happened in the early universe.”

Drew plans to follow up this study with further studies of the galaxy in his ongoing project with ALMA.

Patrick Drew
Dept. of Astronomy
The University of Texas at Austin 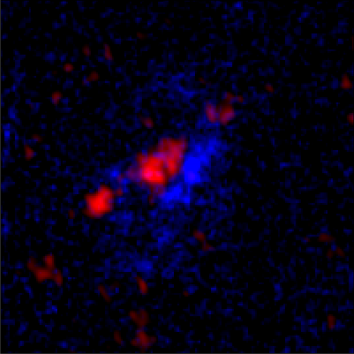