New research by Stella Offner, assistant professor of astronomy at The University of Texas at Austin, finds that magnetic waves are an important factor driving the process of star formation within the enormous clouds that birth stars. Her research sheds light on the processes that are responsible for setting the properties of stars, which in turn affects the formation of planets orbiting them, and, ultimately, life on those planets. The research is published in the current issue of the journal Nature Astronomy.

Offner used a supercomputer to make models of the multitude of processes happening inside a cloud where stars are forming, in an effort to sort out which processes lead to which effects.

“These clouds are violent places,” Offner said. “It’s an extreme environment with all kinds of different physics happening at once,” including gravity and turbulence as well as radiation and winds from forming stars (called stellar feedback). The fundamental question, Offner said, is: “Why are the motions in these clouds so violent?”

Some astronomers attribute the observed motions to gravitational collapse, while others attribute it to turbulence and stellar feedback. Offner wanted to test these theories and study how stars shape their birth environment, but it’s virtually impossible to use telescope observations of these clouds to separate the influence of the various processes, she said.

Her models showed that stellar winds interacting with the cloud magnetic field generated energy and influenced gas at far greater distances across the cloud than previously thought: These local magnetic fields caused action at a distance.

This research has implications for the tug-of-war between feedback — that is, the effect that the newly formed star has on its environment — and gravity on the scale of solar systems up to entire galaxies, Offner said.

As for the next step, Offner says she plans to study this process on larger scales, both in time and space. Her current study focused on one area within star-forming clouds; she said future studies will study the effects of magnetic fields and feedback on scales larger than a single cloud.

This work was supported by a National Science Foundation Career Award to Stella Offner.

Note to editors: Stella Offner has written a blog post on this research for Nature. 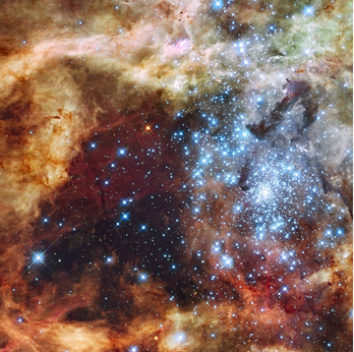 Offner’s research will shed light on the processes inside star-forming regions such as 30 Doradus, seen in this view from Hubble Space Telescope. Credit: NASA/ESA/F. Paresce/R. O’Connell/WFC3 (Click image to access download options from hubblesite.org) 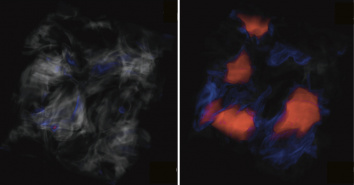 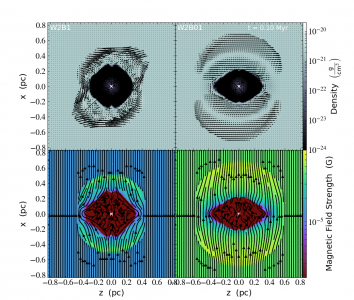 Magnetic Waves from a Young Star