The University of Texas at Austin’s McDonald Observatory today shared in announcing the start of hard rock excavation for the Giant Magellan Telescope’s (GMT’s) massive concrete pier and the foundations for the telescope’s enclosure on its site at Las Campanas Observatory in Chile. McDonald Observatory is a founding partner of the international collaboration building the GMT, which will be the world’s largest telescope when completed in the next decade.

The excavation work will be performed by Minería y Montajes Conpax (known as Conpax), a construction services company that has previously performed site work for other observatories in Chile. Using a combination of hydraulic drilling and hammering, the excavation work is expected to take about five months to complete. Excavation is a key step towards the construction of the GMT, which is expected to see first light as early as 2024.

“The University of Texas at Austin is proud to be a partner in the Giant Magellan Telescope, and welcomes this key milestone of the beginning of telescope construction,” said Dr. Taft Armandroff, Director of McDonald Observatory and Vice Chair of the GMT Board of Directors.

The 25-meter diameter GMT, expected to have a final weight of about 1,600 metric tons, will comprise seven 8.4-meter mirrors supported by a steel telescope structure that will be seated on the concrete pier. It will be housed inside a rotating enclosure that will measure 65 meters (about 22 stories) tall and 56 meters wide. As well as working on the enclosure and telescope pier foundations, Conpax will excavate a recess in the summit rock for the lower portion of the mirror coating chamber and foundations for a utility building and tunnel on the summit.

“With the start of construction of the permanent buildings on the site, the GMT is showing tangible progress towards completion,” said Dr. James Fanson, GMTO Project Manager. “We are delighted that Conpax is carrying out this important work.”

The most challenging part of their work on the summit will be to excavate the solid rock of the mountain top to a depth of 23 feet (7 meters) to hold the concrete for the telescope pier. Much of this work will be done with a hydraulic rock hammer and jack hammer to ensure that the integrity of the solid bedrock below the pier is undamaged. “In total, we expect to remove 5,000 cubic meters or 13,300 tons of rock from the mountain and will need 330 dump truck loads to remove it from the summit,” Fanson said.

Las Campanas Observatory, located in the southern Atacama Desert of Chile and owned by the Carnegie Institution for Science, is one of the world’s premier astronomical sites, known for its clear, dark skies and stable airflow, producing exceptionally sharp images. With its unique design, the GMT will produce images that are 10 times sharper than those from the Hubble Space Telescope in the infrared region of the spectrum and will be used by astronomers to study planets around other stars and to look back to the time when the first galaxies formed.

In the past year, the GMT project has cast the fifth primary mirror segment at the Richard F. Caris Mirror Lab at the University of Arizona, announced a new partner for the project with Arizona State University, and awarded design-build contracts for the telescope mount. 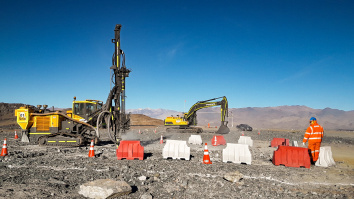 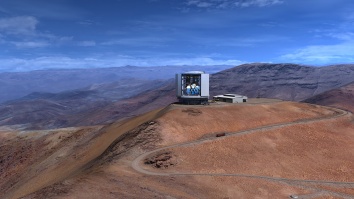