Astrophysicists will conduct experiments designed to re-create the physical environment inside stars, with a new $7 million grant that the Department of Energy’s National Nuclear Security Administration (DOE/NNSA) has awarded to The University of Texas at Austin. This work could help astronomers reduce uncertainties about the sizes and ages of super-dense objects known as white dwarf stars.

The DOE/NNSA grant, distributed over a five-year period, will allow the university to establish a new Center for Astrophysical Plasma Properties (CAPP), which aims to advance astronomy through experimental science. Researchers from the center will conduct “at-parameter” experiments, meaning experiments conducted under the same extreme temperatures and densities found inside stars. Using the Z-machine, the world’s most powerful X-ray source, based at Sandia National Laboratories, the team will replicate the extreme temperatures and densities of plasma, the stuff inside stars.

“Here, if we want to study a white dwarf whose surface is at 15,000 degrees, then we’re doing the experiment at 15,000 degrees,” said Mike Montgomery, deputy director of CAPP and clinical researcher in the Department of Astronomy. “It is really like taking a piece from the Sun and looking at it under a microscope.”

“The really amazing thing about this research is that it changes the way astronomy has been conducted in the past,” said Don Winget, the director of CAPP and a professor in the Department of Astronomy. “There were a lot of things we thought we understood, or knew we didn’t understand in astrophysics. By re-creating those conditions and making real measurements in the laboratory, we’re changing how we think of not only astronomy as a field, but how we think of specific astronomical objects.”

Traditional astrophysics has largely been an observational science, and experiments are usually conducted at magnitudes much smaller than those observed in the cosmos. This has often led to discrepancies between the experiments and observations, Winget said.

These discrepancies have been noticed when calculating the mass of white dwarfs, which are the dense core remnants of “dead” stars. The mass often differs by 10 to 15 percent when measured using different methods. When astronomers try to use white dwarfs to calculate the ages of galaxies, this error translates to an uncertainty of a few billion years.

The center will explore these discrepancies and seek to improve current models using data obtained from these experiments. The grant will support four graduate students and two postdoctoral researchers. The center also brings together experts in various areas of astrophysics from UT Austin, the University of Nevada, Reno, and Sandia National Laboratories.

“Right away, we hit the ground running because we have these people involved, broadening our range of research,” Winget said. “With the center, we’re able to have these interactions and bring new people into laboratory astrophysics.” 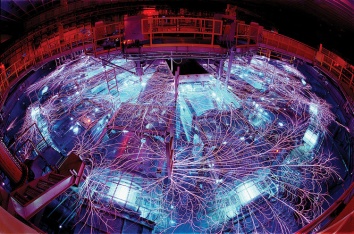