AUSTIN, Texas — NASA’s James Webb Space Telescope, the powerful successor to the Hubble Space Telescope, is expected to launch in 2019 after decades of development. Now the agency has announced the scientists who will use the $8 billion telescope first, testing its instruments to prove it’s in good working order. Steven Finkelstein, an associate professor of astronomy at The University of Texas at Austin, leads one of the chosen Early Release Science projects as principal investigator.

“This will be the first time anyone has had access to this brand new telescope that is in some ways 100 times better than Hubble,” Finkelstein said. “This telescope will reveal enormous truths the moment we turn it on.”

Finkelstein leads the Cosmic Evolution Early Release Science (CEERS) Survey. CEERS is a continuation of his work with the Hubble Space Telescope, studying the youngest galaxies in the early universe to understand how fast stars formed in these early galaxies and how galaxies evolve over time. The CEERS team is made up of 105 astronomers from 10 countries and includes researchers from 28 U.S. universities.

Finkelstein and the CEERS team will combine his new Webb Telescope study with his previous Hubble studies by focusing on some of the same regions of sky in a new light — literally. Webb will study the universe in infrared light, whereas Hubble specializes mostly in optical light (the kind of light our eyes can see).

Using Webb, Finkelstein said, “we will discover the most distant galaxies ever seen — galaxies that were literally invisible to Hubble.” He explained that Webb will see galaxies as they existed 13.4 billion years ago, when the universe was less than 3 percent of its current age.

The CEERS proposal was one of just 13 selected from more than 100 submitted to NASA for early access to Webb. CEERS was selected based on the importance of the science it will do, as well as the fact it will use multiple instruments on the telescope and test many different modes of observing. In short, CEERS will put the Webb through its paces.

The project will be carried out in the telescope’s first five months of operation. The data Finkelstein’s team collects will be made available immediately to other scientists around the world. “We’ll be working hard to rapidly produce usable data products for the astronomy community,” he said.

In all, UT Austin astronomers are involved in five of the telescope’s 13 early release science programs. In addition to Finkelstein’s leadership of CEERS, UT astronomers are taking important roles as co-investigators on three other projects: Hubble Postdoctoral Fellow Brendan Bowler and assistant professor Adam Kraus in a project that will image planets around other stars, research scientist Kristen McQuinn in a project to study populations of stars, and McDonald Postdoctoral Fellow Justin Spilker in a project to study galaxies that exhibit an optical effect called gravitational lensing. Several more UT astronomers, including many graduate students, are collaborators on early Webb projects. 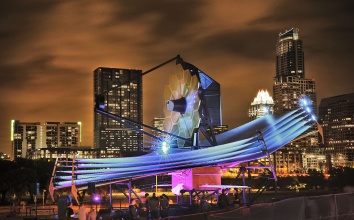 A full-sized model of the James Webb Space Telescope is seen in Austin during the South by Southwest festival in 2013. This and other images are available from the JWST image gallery. Click the image to access.