Voices reverberating off mountains and the sound of footsteps bouncing off walls are examples of an echo. Echoes happen when sound waves ricochet off surfaces and return to the listener.

Space has its own version of an echo. It’s not made with sound but with light, and occurs when light bounces off dust clouds.

The Hubble Space Telescope has just captured one of these cosmic echoes, called a “light echo,” in the nearby starburst galaxy M82, located 11.4 million light-years away. A movie assembled from more than two years’ worth of Hubble images reveals an expanding shell of light from a supernova explosion sweeping through interstellar space three years after the stellar blast was discovered. The “echoing” light looks like a ripple expanding on a pond. The supernova, called SN 2014J, was discovered on January 21, 2014.

This research was conducted by an international team of researchers led by Yi Yang of Texas A&M University, and including J. Craig Wheeler of The University of Texas at Austin.

"This is a spectacular use of the Hubble Space Telescope with cosmological implications for the nature of Type Ia supernovae and the dust around them," Wheeler said.

A light echo occurs because light from the stellar blast travels at different distances to arrive at Earth. Some light echoes come to Earth directly from the supernova blast. Other light is delayed because it travels indirectly. In this case, the light bounding off a huge dust cloud that extends 300 to 1,600 light-years around the supernova and is being reflected toward Earth.

So far, astronomers have spotted only 15 light echoes around supernovae outside our Milky Way galaxy. Light echo deflections from supernovae are rarely seen because they must be nearby for a telescope to resolve them. 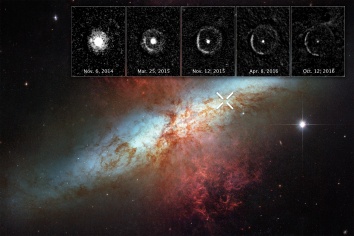