AUSTIN — Astronomers from The University of Texas at Austin, working with scientists from other institutions and amateur astronomers, have spotted the dusty tails of six exocomets — comets outside our solar system — orbiting a faint star 800 light years from Earth.

These cosmic balls of ice and dust, which were about the size of Halley’s comet and traveled about 100,000 miles per hour before they ultimately vaporized, are some of the smallest objects yet found outside our own solar system.

The discovery by Andrew Vanderburg, NASA Sagan Fellow at UT Austin, and the team marks the first time that an object as small as a comet has been inferred using transit photometry, a technique by which astronomers observe a star’s light for telltale dips in intensity. Such dips signal potential transits, or crossings of planets or other objects in front of a star, which momentarily block a small fraction of its light.

“It’s just thrilling to find these comets,” Vanderburg says. “No one has ever seen anything quite like these transits before. These are some of the first glimpses at the population of comets outside our own solar system.”

The researchers were able to pick out the comet’s tail, or trail of gas and dust, which blocked about one-tenth of 1 percent of the star’s light as the comet streaked by.

“It’s amazing that something several orders of magnitude smaller than the Earth can be detected just by the fact that it’s emitting a lot of debris,” says Saul Rappaport, professor emeritus of physics in MIT’s Kavli Institute for Astrophysics and Space Research. “It’s pretty impressive to be able to see something so small, so far away.”

The team have published their results this week in the Monthly Notices of the Royal Astronomical Society. Rappaport is the paper’s lead author. Other authors include Vanderburg, Adam Kraus, and Aaron Rizzuto of The University of Texas at Austin; astronomers from NASA Ames Research Center and Northeastern University; and amateur astronomers including Thomas Jacobs of Bellevue, Washington.

“Where few have traveled”

The detection was made using data from NASA’s Kepler Space Telescope, a stellar observatory that was launched into space in 2009. For four years, the spacecraft monitored about 200,000 stars for dips in starlight caused by transiting exoplanets.

To date, the mission has identified and confirmed more than 2,400 exoplanets, mostly orbiting  anonymous stars in the constellation Cygnus, with the help of  automated algorithms that quickly sift through Kepler’s data, looking for characteristic dips in starlight.

The smallest exoplanets detected thus far measure about one-third the size of the Earth. Comets, in comparison, span just several football fields, or a small city at their largest, making them incredibly difficult to spot.

However, on March 18, Jacobs, an amateur astronomer who has made it his hobby to comb through Kepler’s data, was able to pick out several curious light patterns amid the noise.

Jacobs, who works as an employment consultant for people with intellectual disabilities by day, is a member of the Planet Hunters — a citizen scientist project first established by Yale University to enlist amateur astronomers in the search for exoplanets. Members were given access to Kepler’s data (which are now public) in hopes that they might spot something of interest that a computer might miss.

In January, Jacobs set out to scan the entire four years of Kepler’s data taken during the main mission, comprising over 200,000 stars, each with individual light curves, or graphs of light intensity tracked over time. Jacobs spent five months sifting by eye through the data, often before and after his day job, and through the weekends.

“Looking for objects of interest in the Kepler data requires patience, persistence, and perseverance,” Jacobs says. “For me it is a form of treasure hunting, knowing that there is an interesting event waiting to be discovered. It is all about exploration and being on the hunt where few have traveled before.”

“Something we’ve seen before”

Jacobs’ goal was to look for anything out of the ordinary that computer algorithms may have passed over. In particular, he was searching for single transits — dips in starlight that happen only once, meaning they are not periodic like planets orbiting a star multiple times.

In his search, he spotted three such single transits around KIC 3542116, a faint star located 800 light years from Earth (the other three transits were found later by the team). He flagged the events and alerted Rappaport and Vanderburg, with whom he had collaborated in the past to interpret his findings.

“We sat on this for a month, because we didn’t know what it was — planet transits don’t look like this,” Rappaport recalls. “Then it occurred to me that, ‘Hey, these look like something we’ve seen before.’”

In a typical planetary transit, the resulting light curve resembles a “U,” with a sharp dip, then an equally sharp rise, as a result of a planet first blocking a little, then a lot, then a little of the light as it moves across the star. However, the light curves that Jacobs identified appeared asymmetric, with a sharp dip, followed by a more gradual rise.

Rappaport realized that the asymmetry in the light curves resembled disintegrating planets, with long trails of debris that would continue to block a bit of light as the planet moves away from the star. However, such disintegrating planets orbit their star, transiting repeatedly. In contrast, Jacobs had observed no such periodic pattern in the transits he identified.

“We thought, the only kind of body that could do the same thing and not repeat is one that probably gets destroyed in the end,” Rappaport says.

In other words, instead of orbiting around and around the star, the objects must have transited, then ultimately flown too close to the star, and vaporized.

“The only thing that fits the bill, and has a small enough mass to get destroyed, is a comet,” Rappaport says.

The researchers calculated that each comet blocked about one-tenth of 1 percent of the star’s light. To do this for several months before disappearing, the comet likely disintegrated entirely, creating a dust trail thick enough to block out that amount of starlight.

Vanderburg says the fact that these six exocomets appear to have transited very close to their star in the past four years raises some intriguing questions, the answers to which could reveal some truths about our own solar system.

“Why are there so many comets in the inner parts of these solar systems?” Vanderburg says. “Is this an extreme bombardment era in these systems? That was a really important part of our own solar system formation and may have brought water to Earth. Maybe studying exocomets and figuring out why they are found around this type of star … could give us some insight into how bombardment happens in other solar systems.”

The researchers say that in the future, the MIT-led mission TESS (Transiting Exoplanet Survey Satellite) will continue the type of research done by Kepler.

Apart from contributing to the fields of astrophysics and astronomy, Rappaport says, the new detection speaks to the perseverance and discernment of citizen scientists.

“I could name 10 types of things these people have found in the Kepler data that algorithms could not find, because of the pattern-recognition capability in the human eye,” Rappaport says. “You could now write a computer algorithm to find this kind of comet shape. But they were missed in earlier searches. They were deep enough but didn’t have the right shape that was programmed into algorithms. I think it’s fair to say this would never have been found by any algorithm.”

This research made use of data collected by the Kepler mission, funded by the NASA Science Mission directorate. This work was performed in part under contract with the California Institute of Technology/Jet Propulsion Laboratory funded by NASA through the Sagan Fellowship Program executed by the NASA Exoplanet Science Institute. Original release text courtesy of MIT News. 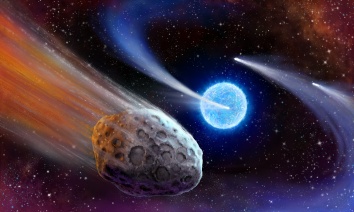