AUSTIN — A study published in today’s Astrophysical Journal by University of Texas at Austin assistant professor Steven Finkelstein and colleagues reveals that galaxies were more efficient at making stars when the universe was younger. The announcement explains the team’s discovery, announced in the journal’s September 1 issue, that there are a lot more bright, highly star-forming galaxies in the early universe than scientists previously thought.

“This was an unexpected result,” Finkelstein said. “It has implications for galaxy formation at the earliest times” in the universe.

For both studies, his team used galaxy observations from Hubble Space Telescope’s CANDELS survey, of which he is a team member. Hubble’s largest survey to date, CANDELS stands for Cosmic Assembly Near-infrared Deep Extragalactic Legacy Survey.

Today’s finding stems from studies of about 8,000 CANDELS galaxies seen at times ranging from 0.75 to 1.5 billion years after the Big Bang (that is, between redshift four and redshift seven).  As the universe is a little less than 14 billion years old, this corresponds to only the first five to 10 percent of the history of the universe.

There could be a couple of different reasons why, Finkelstein said.

First, as the universe has been expanding outward since the Big Bang, at earlier times everything in the universe was packed closer together, including the gas in galaxies. Dense gas is the material that makes stars, so perhaps these galaxies simply had more of it.

Second: feedback. “No galaxy is 100 percent efficient at turning gas into stars,” Finkelstein said, explaining that there are several mechanisms inside galaxies that can cause some of the gas to not form stars. These include things like the massive explosions called supernovae, winds from massive stars, and active supermassive black holes that can heat their surrounding gas. Altogether, these barriers to star formation collectively are called “feedback.” Finkelstein said that galaxies at earlier times may experience less feedback, and so may form stars more readily.

He anticipates that these bright galaxies in the early universe can be studied in greater detail with the forthcoming James Webb Space Telescope (JWST), the infrared successor to Hubble, which will launch in 2018. Future studies with JWST should provide a better understanding of star formation in early galaxies. 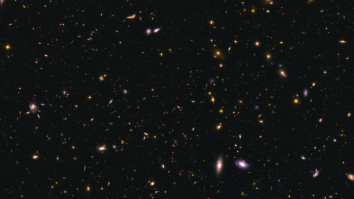 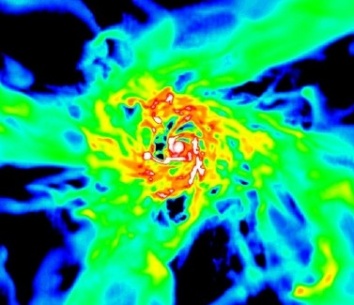