AUSTIN — The Giant Magellan Telescope (GMT) has announced a major milestone recently with 11 international partners including The University of Texas at Austin unanimously approving its construction, securing the future of the project with more than $500 million to begin work on the world’s most powerful optical telescope. The decision initiates final design and fabrication of the GMT, which is poised to become the largest optical telescope in existence.

“We are excited to work with 10 other world-class partners to develop a telescope that will address the most important issues in astronomy today,” said Dean of Natural Sciences Dr. Linda Hicke. A global scientific collaboration, the GMT has institutional partners in Australia, Brazil, Korea, the United States, and in host nation Chile.

GMT is integral to the future of astronomy at The University of Texas at Austin. “The Giant Magellan Telescope will transform our research and education programs in astronomy, and will complement our facilities at McDonald Observatory in West Texas,” said McDonald Observatory Director Dr. Taft Armandroff.

The 25-meter telescope aims to be the first of the new generation of extremely large telescopes, with more than six times the collecting area of the current largest optical telescopes in existence. The GMT will enable astronomers to look deeper into space and further back in time than ever before, producing images up to 10 times sharper than those produced by the Hubble Space Telescope. It is expected to see first light in 2021 and be fully operational by 2024.

A ground-based telescope planned for construction at the Las Campanas Observatory in northern Chile, the GMT will give scientists a powerful new tool to better understand how stars and galaxies formed shortly after the Big Bang, to measure the masses of black holes billions of light years from Earth, and to discover planets orbiting other stars in the Milky Way galaxy. It will reveal the faintest objects ever seen in space, including extremely distant and ancient galaxies, whose light has been travelling to Earth since shortly after the Big Bang, 13.8 billion years ago.

“The decision by our partner institutions and the Board of Directors to start construction is a crucial milestone on our journey to making these amazing discoveries through state-of-the-art science, technology, and engineering,” said Dr. Wendy Freedman of the University of Chicago, former chair of the Giant Magellan Telescope Organization (GMTO) Board of Directors.

The construction approval means work will begin on the telescope’s core structure and the scientific instruments that lie at the heart of the $1 billion project.

“The University of Texas at Austin plans to help develop the  telescope’s high-technology instrumentation,” Armandroff said.

Early preparation for construction has included groundwork at the mountain-top site at Las Campanas and various stages of fabrication of four of the telescope’s seven 8.4-meter (27-foot) primary mirror segments.

Each mirror segment weighs 17 tons and takes one year to cast and cool, followed by more than three years of surface generation and meticulous polishing at the Richard F. Caris Mirror Lab of the Steward Observatory of the University of Arizona in Tucson, Ariz. Taken together, the total light-collecting area of the mirrors will be 25.4-meters (82 feet).

Note to Editors: To access a video news package including interviews with GMTO partners and b-roll, as well as images and video graphics of the Giant Magellan Telescope, please visit: www.gmto.org/gallery. 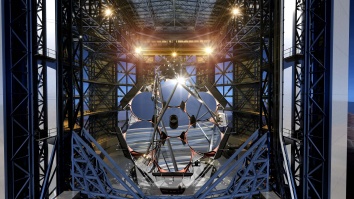 Images, animation, and video are available from the Giant Magellan Telescope Organization. To view and download, visit the GMTO gallery at http://www.gmto.org/gallery