FORT DAVIS — For the past year, McDonald Observatory has celebrated its 75th anniversary via events around the state. Now that those events have concluded, the arrival of a piece of the observatory’s history puts a cap on the anniversary year.

Prior to building the observatory’s first telescope, the 82-inch reflector that today is known as the Otto Struve Telescope, Warner and Swasey Company of Cleveland, Ohio, built a detailed model. At four feet tall and about three feet in diameter at the base, the one-ton model is a bit larger than a washing machine. For three quarters of a century, this model has resided in Ohio in various museums. It is now on view at McDonald Observatory’s Frank N. Bash Visitors Center.

The model is currently on a long-term loan to the observatory. Supporters donated to an online crowdfunding campaign to pay for shipping it to Texas for the 75th anniversary. Before traveling to McDonald in late July, the model was on display in Austin at the Bullock Texas State History Museum as part of the exhibit “The McDonald Observatory: 75 Years of Stargazing.”

At the time of its dedication on May 5, 1939, the Otto Struve Telescope dome housed the entirety of the observatory. Not only did it contain the world’s second-largest telescope, but also living and sleeping quarters for astronomers. Over 75 years, astronomers have used this telescope to study every type of astronomical object, from distant galaxies to stars in the Milky Way galaxy, to planets, moons, and other bodies of our solar system.

Renamed the Otto Struve Telescope in 1966 after the observatory’s first director, it has received extensive upgrades over the years and is still in regular use. The telescope has recently been renovated to allow Special Viewing Nights to resume. This makes it one of the largest telescopes in the country available to the general public. 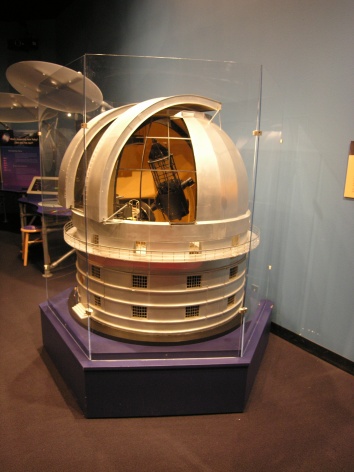