Astronomers from The University of Texas at Austin and Penn State University have solved a mystery surrounding controversial signals coming from a dwarf star considered to be a prime target in the search for extraterrestrial life. The team has proven that the signals suspected to come from two planets orbiting the star at a distance where liquid water could potentially exist (so-called “Goldilocks planets,” whose orbits are just right), actually are coming from the star itself. The study will be published by the journal Science in its online Science Express issue today and in a future print edition of the journal.

"This result is exciting because it explains, for the first time, all the previous and somewhat conflicting observations of the intriguing dwarf star Gliese 581, a faint star with less mass than our Sun that is just 20 light years from Earth," said lead author Paul Robertson, a recent PhD graduate of The University of Texas at Austin. Robertson is now a postdoctoral fellow at Penn State.

As a result of this research, three planets are confirmed to orbit this dwarf star. None of the three are solidly inside this star system's habitable zone, where liquid water could exist on a rocky planet like Earth.

“Of course, we would want to find habitable-zone planets, rather than show that the signal is caused by the star and not by a planet,” said team member Michael Endl, a research scientist at The University of Texas at Austin’s McDonald Observatory. “But this is an important step in the whole process. Once we have learned more about these planetary-type signals that originate from the star, we can attempt to correct them and better find the real planets buried in the data. It was great to see that the signals of the three planets in the Gliese 581 system got stronger once Paul applied the correction for the activity of the star.”

Astronomers search for exoplanets by measuring shifts in the pattern of a star's spectrum — the different wavelengths of radiation that it emits as light. These "Doppler shifts" can result from subtle changes in the star's velocity caused by the gravitational tugs of orbiting planets. But Doppler shifts of a star's “absorption lines” also can result from magnetic events like sunspots originating within the star itself — giving false clues of a planet that does not actually exist.

The research team made its discovery by analyzing Doppler shifts in existing spectroscopic observations of the star Gliese 581 obtained with the ESO HARPS and Keck HIRES spectrographs. The Doppler shifts that the scientists focused on were the ones most sensitive to magnetic activity. Using careful analyses and techniques, they boosted the signals of the three innermost planets around the star, but “the signals attributed to the existence of the two controversial planets disappeared, becoming indistinguishable from measurement noise,” said team member Suvrath Mahadevan of Penn State. “The disappearance of these two signals after correcting for the star’s activity indicates that these signals in the original data must have been produced by the activity and rotation of the star itself, not by the presence of these two suspected planets.”

The research methods that made this work possible came from Robertson’s time at The University of Texas.

“We developed these tools for the Hobby-Eberly Telescope (HET) M dwarf survey when Paul was working on his PhD thesis here at UT,” Endl said. “When he applied these methods to the Gliese 581 system, we were surprised to see that the planet, that was thought to reside within the habitable zone, just went away.”

“While it is unfortunate to find that two such promising planets do not exist, we feel that the results of this study will ultimately lead to more Earth-like planets,” Robertson said.

Endl agrees that the future is bright. “I am sure that in the near future we will have a much larger sample of interesting system which we will study with these methods,” he said. “Once the upgraded High-Resolution-Spectrograph (HRS) at the HET becomes available we will continue and intensify our search for low-mass, potentially habitable planets around nearby stars. And in a few years, the Habitable-zone Planet Finder will be installed at the HET. This instrument that Suvrath, Paul, and colleagues at Penn State are currently building will be extraordinarily sensitive to these small planets around small stars. Our study of the Gliese 581 system is highly relevant for these upcoming planet searches.” 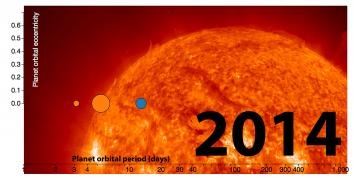