AUSTIN — Super Planet Crash is a pretty simple game: players build their own planetary system, putting planets into orbit around a star and racking up points until they add a planet that destabilizes the whole system. Beneath the surface, however, this addictive little game (available online at http://www.stefanom.org/spc) is driven by highly sophisticated software code that astronomers use to find planets beyond our solar system (called exoplanets).

University of Texas at Austin astronomer Stefano Meschiari did the bulk of the programming for the game while a graduate student at The University of California, Santa Cruz. He currently holds the W.J. McDonald postdoctoral fellowship at Texas, where he studies the evolution and characteristics of exoplanets.

Super Planet Crash is based on the latest version of Systemic Console, a scientific software package used to pull planet discoveries out of the reams of data acquired by automatic telescope surveys of the stars. Systemic was developed at UC Santa Cruz by professor Greg Laughlin and his students.

Meschiari used the Systemic code as a foundation to create not only Super Planet Crash but also an online web application (Systemic Live) for educational use.

"Systemic Console is open-source software that we've made available for other scientists to use. But we also wanted to create a portal for students and teachers so that anyone can use it," Laughlin said. "For the online version, Stefano tuned the software to make it more accessible, and then he went even further with Super Planet Crash, which makes the ideas behind planetary systems accessible at the most visceral level."

Meschiari said he's seen people quickly get hooked on playing the game. "It doesn't take long for them to understand what's going on with the orbital dynamics," he said.

The educational program, Systemic Live, provides simplified tools that students can use to analyze real data. "Students get a taste of what the real process of exoplanet discovery is like, using the same tools scientists use," Meschiari said.

The previous version of Systemic was already being used in physics and astronomy classes at UCSC, Columbia University, the Massachusetts Institute of Technology (MIT), and elsewhere, and it was the basis for an MIT Educational Studies program for high school teachers. The new online version has earned raves from professors who are using it.

"The online Systemic Console is a real gift to the community," said Debra Fischer, professor of astronomy at Yale University. "I use this site to train both undergraduate and graduate students — they love the power of this program."

Planet hunters use several kinds of data to find planets around other stars. Very few exoplanets have been detected by direct imaging because planets don't produce their own light and are usually hidden in the glare of a bright star. A widely used method for exoplanet discovery, known as the radial velocity method, measures the tiny wobble induced in a star by the gravitational tug of an orbiting planet. Scientists can derive a planet's mass and orbit from radial velocity data.

Another method detects planets that pass in front of their parent star, causing a slight dip in the brightness of the star. Known as the transit method, this approach can determine the size and orbit of the planet.

Both of these methods rely on repeated observations of periodic variations in starlight. When multiple planets orbit the same star, the variations in brightness or radial velocity are very complex. Systemic Console is designed to help scientists explore and analyze this type of data. It can combine data from different telescopes, and even different types of data if both radial velocity and transit data are available for the same star. Systemic includes a large array of tools for deriving the orbital properties of planetary systems, evaluating the stability of planetary orbits, generating animations of planetary systems, and performing a variety of technical analyses.

"Systemic Console aggregates data from the full range of resources being brought to bear on extrasolar planets and provides an interface between these subtle measurements and the planetary systems we're trying to find and describe," Laughlin said.

Laughlin said he was struck by the fact that, while the techniques used to find exoplanets are extremely subtle and difficult, the planet discoveries that emerge from these obscure techniques have generated enormous public interest. "These planet discoveries have done a lot to create public awareness of what's out there in our galaxy, and that's one reason why we wanted to make this work more accessible," he said. 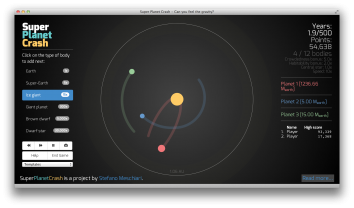 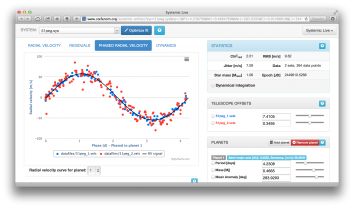