FORT DAVIS — Ten high school students are spending the week at McDonald Observatory learning to use telescopes to support a study of one of the biggest mysteries in science today: dark energy. They are also sharing their experiences using social media.

University of Texas at Austin post-doctoral researcher Keely Finkelstein is running the project, along with astronomer Irina Marinova and teachers Sherre Boothman of Lehman High School in Kyle and Wade Green of Stony Point High School in Round Rock. The students hail from those schools, as well as Austin's Anderson High School, Khabele School, and St. Stephen's Episcopal School.

"This workshop is a unique experience for these students," Finkelstein said. "They are getting a first-hand look and hands-on experience of what it's like to be a research astronomer."

Student participant Eric Wan agrees. "This HETDEX Student Research program has been one of the best experiences of my life," he said. "The astronomers are enthusiastic about their work and incredibly knowledgeable. This is a forefront of modern science and I'm thrilled to be involved."

The group is spending seven days and six nights at the observatory. By day, the students are learning how telescopes work, learning how to collect data, attending talks on various topics in astronomy, and sharing their experiences to their peers through social media outlets. Each night, they are learning to use research-grade telescopes under the darkest night skies of any observatory in the continental United States.

"The students are taking real data using the MONET telescope at McDonald, and are learning the full process of astronomical research, including taking observations, and data analysis," Finkelstein said. "They get to experience all aspects of observing, both the exciting parts, and the not-so-glamorous parts."

Equally important, says Marinova, "is that the students are able to interact in an informal setting with the scientists and engineers doing research and maintaining the observatory. They are able to talk to them one-on-one about what their jobs entail and the science that they do."

Student Samuel Ervin said he really enjoyed that part. "Just the idea of being able to live and talk with real astronomers is mind-blowing," he said. "I know that when this week is over I shall be looking into a career that could hopefully end in being an astronomer."

This week's student research experience is a pilot program for a larger one still in the planning stages. The aim is to involve high school students in one of McDonald Observatory's largest, most important research efforts: the Hobby-Eberly Telescope Dark Energy Experiment (HETDEX). The project seeks to understand why the universe is expanding faster all the time, a fact discovered by two teams of astronomers in 1998 which recently garnered them the Nobel Prize in physics.

University of Texas at Austin astronomy professor Karl Gebhardt is the project scientist for HETDEX.

"There are two aspects to this student project," Gebhardt said. "One is to eventually upgrade the McDonald visitors center with a whole new exhibit [on dark energy] and we want to bring high school students in on the Facebook and YouTube stuff — they know how to make an online presence."

The second aspect is getting students involved in actual HETDEX research. "What we want is for them to take images of fields we're observing at the same time on HET [the Hobby-Eberly Telescope, one of the world's largest]. We'll use the students' imaging data to calibrate the HET data."

To get those simultaneous images, he says, is going to take "a lot of nights and a lot of time — that's where the high school students come in. And we hope to excite them about science at the same time."

It certainly worked for student Alyssa Epstein. "This has been a truly amazing experience for me because while I've always had an interest in astronomy, the program has made it possible for me to observe the universe first-hand and draw conclusions about these new scientific concepts — dark energy and dark matter — for myself," she said. "I now have a better idea about being an astronomer, operating a telescope, and the scientific world in general."

The workshop was funded by the university's Texas Cosmology Center. McDonald Observatory is seeking funding for future workshops. 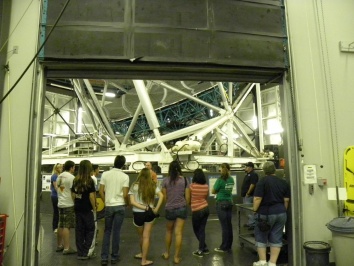