AUSTIN — A Hubble Space Telescope study of massive galaxies two to three billion years after the Big Bang has uncovered two remarkable results that
challenge the common lore that major mergers play a dominant role in growing galaxies over a wide range of cosmic epochs.

Astronomers led by University of Texas at Austin graduate student Tim Weinzirl and associate professor Shardha Jogee will present their findings, recently published in The Astrophysical Journal, today at the 219th meeting of the American Astronomical Society in Austin.

Weinzirl and Jogee studied 166 of the most massive galaxies present only a few billion years after the Big Bang , selected from the GOODS NICMOS survey headed by professor Christopher Conselice of the University of Nottingham in the U.K.

“This is one of the largest near-infrared surveys of massive galaxies in the early universe conducted with the Hubble Space Telescope,” Conselice said.

The 166 selected galaxies contain between 50 billion to half a trillion solar masses worth of stars. Even at such early epochs, many of these young massive galaxies already harbor more stars than our own Milky Way, a spiral galaxy containing about 80 billion stars today.

Weinzirl led an extensive, sophisticated analysis that found that a remarkably high fraction (60%) of these massive young galaxies present two to three billion years after the Big Bang have a disk component, making them look like a thick pancake.

In contrast, today’s most massive galaxies (their descendents) typically have large bulges. They are shaped like watermelons, and are called elliptical galaxies (which contain just a bulge) and lenticular galaxies (which have both a bulge and a disk.)

“These massive galaxies of the past are five times more likely to be disk-shaped than their descendents,” Weinzirl said.

Another difference, Jogee said, is that “many of these disky massive galaxies are prodigious star factories: They are churning new young stars over 100 times faster than present-day massive galaxies.”

Finding such a large fraction of massive galaxies with disk-like properties two to three billion years after the Big Bang has far-reaching implications. “It challenges models of galaxy growth, particularly the popular idea that galaxies grow in mass primarily via the violent major merger of galaxies,” Jogee said.

A “major merger” is the violent merger of two galaxies of similar mass, and it can radically transform two merging spiral galaxies into a new system that is no longer a disk-dominated galaxy, but instead has a prominent bulge. If major mergers dominated galaxy growth at early cosmic epochs, one would expect to find most galaxies to be dominated by bulges rather than by disks.

“Even considering the latest theoretical simulations of more extreme, very gas-rich major mergers does not solve the problem,” Weinzirl said. Instead, the results suggest that another process, called “cold mode accretion” plays a key role in growing massive galaxies at early cosmic epochs. In that process, galaxies grow in mass by accreting cold gas from large-scale cosmological filaments.

Weinzirl and Jogee’s study raises a second baffling challenge. Just like toddlers growing up, these massive young galaxies are expected to increase their mass over time. They have to turn into the most massive galaxies present in today’s universe, the elliptical and lenticular galaxies. This transformation is nothing short of dramatic, since the progenitors and descendants are radically different in size, shape, and structure!

Their study showed that as many as 40% of the young massive galaxies are ultracompact: half of their light and mass are jam-packed into a small amount of space (less than 65,000 light-years in radius), Weinzirl said. In contrast, less than 1% of their descendants, today’s massive elliptical and lenticular galaxies, are ultra-compact. Most are much larger and more spread out.

Furthermore, while many of the massive young galaxies are disky galaxies (shaped likethick pancakes), massive ellipticals and lenticulars tend to be dominated by bulges (shaped like watermelons).

“While major mergers can morph some disky galaxies into bulgy ones, and produce part of observed growth in size, there simply does not seem to be enough major mergers to produce the full blow-up in size needed,” Jogee said.

Instead, some of the latest theoretical simulations suggest that minor mergers — in which a large galaxy swallows a smaller galaxy — might hold the key.

“Minor mergers are much more common than major ones, because there are more lower-mass galaxies than there are very massive galaxies,” Weinzirl explained, and they “likely drive the growth of ultra-compact galaxies into more extended galaxies.”

“The bottom line is that our study, and a rising body of evidence from other lines of enquiry, now suggest that violent major mergers have been overrated. They are spectacular cosmic fireworks, but they do not necessarily drive galaxy growth at all epochs,” Jogee said.

There’s plenty more work to be done in understanding the evolution of massive galaxies. On the theoretical front, “simulations have yet to reproduce the widely diverse massive young galaxies, running the gamut from utlra-compact to extended disky systems, and from quiescent to widely star-forming,” Weinzirl said.

On the observational frontier, “we are thrilled that the next generation 25-meter Giant Magellan Telescope (GMT), in which UT-Austin is a major partner, will provide unparalleled insights into massive young galaxies and the physics of major mergers at early cosmic epochs,” Jogee said. 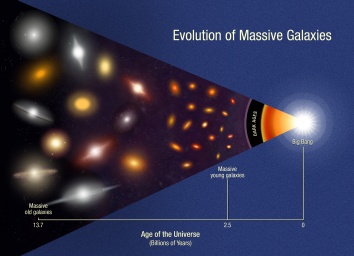 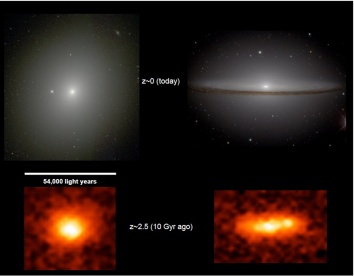 Comparison of Massive Galaxies at Early Times vs. Today 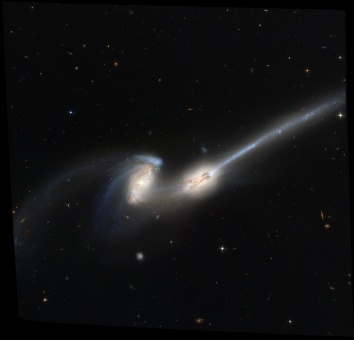