MOFFETT FIELD, Calif. —This morning NASA announced the discovery of the first planet located in the "habitable zone" around a star — the "just-right" orbit that's not too hot, nor too cold for water to exist in liquid form, making life as we know it possible. Astronomers from The University of Texas at Austin's McDonald Observatory involved in this and other Kepler research will present their findings at the first Kepler Science Conference this week at NASA's Ames Research Center.

Kepler is a space mission that looks for minute dips in the light from a star that might indicate a planet is passing in front of the star, an event called a "transit." Because other types of phenomena can mimic such a signal, all stars pegged as possible planet hosts by Kepler must be investigated by ground-based telescopes.

To date, 400 candidate stars have been vetted by astronomers at McDonald Observatory — including the 'star' of today's announcement, Kepler-22. Observations by University of Texas at Austin graduate student Paul Robertson and research scientist Michael Endl eliminated other possible causes of the transit signal using the Harlan J. Smith Telescope. Later, other astronomers found that the planet, called Kepler-22b, is just 2.4 times the size of Earth and may be as much as 20 times Earth's mass.

"As planet hunters we have speculated for decades that our observations reveal only the tip of the iceberg, the giant planets that are easy to find," Endl said. "Kepler shows us now the rest of the iceberg with its large population of smaller planets. And Kepler is not done yet. The most exciting discoveries are still to come."

At the conference, Cochran will give a talk on Kepler-18, the multi-planet system he studied that was found to have at least three planets orbiting very close, with the outer two, Neptune-mass planets, orbiting near resonance with each other.

Endl will be announcing the first planet confirmed by the 9.2-meter Hobby-Eberly Telescope (HET) at McDonald Observatory. The giant telescope is one of several that Kepler targets are referred to for in-depth study once they've been vetted by more modest-sized telescopes like the 2.7-meter Harlan J. Smith Telescope or similar ones.

The subject of Endl's announcement is Kepler-15b, a "hot Jupiter." That's a massive planet orbiting extremely close its parent star. Endl's findings suggest the planet is unusually rich in heavy chemical elements — 30 or 40 times more than Earth. The researchers figured this out by combining the planet's radius (known from the transit observations by Kepler) with the planet's mass (found using HET observations). Kepler-15b's mass and radius combined reveal that the planet is small for its mass. Brugamyer also studied the planet's parent star with HET and found it to have an extremely high concentration of heavy chemical elements, which may explain why the planet is enriched in heavy elements.

The team has also used HET to confirm the planet Kepler-17b and four additional Kepler planets, including a double-planet system, that will be published soon.

In the future, HET will be an even more powerful tool for Kepler follow-up. HET will undergo a major upgrade beginning in March 2012.

"We will gain a very large improvement in efficiency of the instrument," Endl said. Once the upgrade is complete, "we will charge ahead into the field of very low mass planets, Neptunes or super-Earths," he said.

HET isn't the only telescope working to extend and improve itself. The Kepler team is hoping to extend the spacecraft's mission for several more years, Cochran said. Launched in 2009, Kepler's nominal 3.5-year mission is set to end in October 2012.

"We're putting in an extended mission proposal to NASA," Cochran said of the Kepler mission team. "The goal is to get four more years so we will then be able to find a habitable, Earth-sized planet around a Sun-like star."

Established in 1932, The University of Texas at Austin McDonald Observatory near Fort Davis, Texas, hosts multiple telescopes undertaking a wide range of astronomical research under the darkest night skies of any professional observatory in the continental United States. McDonald is home to the consortium-run Hobby- Eberly Telescope (a joint project of The University of Texas at Austin, The Pennsylvania State University, Ludwig-Maximilians-Universität München, and Georg-August-Universität Göttingen). An internationally known leader in astronomy education
and outreach, McDonald Observatory is also pioneering the next generation of astronomical research as a founding partner of the Giant Magellan Telescope. 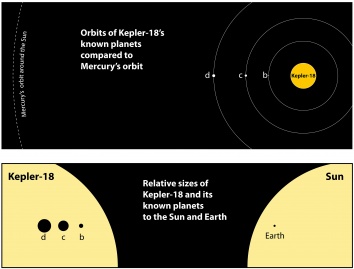