FORT DAVIS, Texas — An explosion far across the universe rattled astronomers last year on Christmas Day. Called a gamma-ray burst (GRB), it incited a flurry of activity from telescopes in space and on the ground, including the 2.1-meter Otto Struve Telescope at The University of Texas at Austin's McDonald Observatory. This year, just in time for Christmas, astronomers say they now know what happened — and it requires a new model for the origin of at least some GRBs.

GRBs are brief and intense flashes of gamma rays that can occur randomly from any direction of the sky. They are so energetic that astronomers can detect them even at distances of thousands of millions of light years. The bursts can last from a few milliseconds to more than half an hour.

Gamma rays cannot penetrate Earth's atmosphere, so GRBs are detected by satellites in orbit. The December 25, 2010, event — nicknamed the "Christmas Burst" — was detected by NASA's Swift satellite, which pinpointed its location and distributed its coordinates to astronomers all over the world. They immediately began to follow up the burst at optical and infrared wavelengths from ground-based telescopes, to study the phase called "afterglow."

"The news of the burst reached our team during a Christmas party at McDonald Observatory," says astronomer Myungshin Im of Seoul National University. Im and Soojong Pak of Kyung Hee University had left McDonald a few days prior and returned to Korea, but several of their students remained to carry on their studies of quasars with their instrument CQUEAN (Camera for Quasars in the Early Universe). When Im heard about the burst back in Seoul, he contacted his team at McDonald. They broke from their planned observations to follow up the GRB. "The 2.1-meter Otto Struve Telescope observed the burst with CQUEAN about seven hours after Swift discovered it," Im said.

Astronomers theorize that GRBs shorter than two seconds are created by the merger of two neutron stars in a binary star system, and bursts longer than two seconds result from the collapse of a single massive star. The Christmas Burst was peculiar. It lasted more than half an hour, much longer than most GRBs detected so far. And the amount of radiation it put out at various wavelengths was different from what astronomers had seen in GRBs before. The distribution of radiation seen in the Christmas Burst challenges the long-standing paradigm that GRB afterglows are produced by charged particles moving in magnetic fields at more than 99% of the speed of light (known as "synchrotron radiation").

"The data taken at McDonald Observatory played an important role in determining the emission mechanism of the GRB afterglow in its early phase by providing data at optical and near-infrared wavelengths," said Soojong Pak. "These data helped reveal the very interesting nature of the Christmas burst."

Based on a multitude of space and ground-based observations, Thöne's research team proposes a new scenario to explain the origin of the Christmas Burst. They propose that it was the result of a neutron star merging with the helium core of an evolved giant star, at a distance from Earth of about 5.5 thousand million light-years. This somewhat exotic binary system underwent a phase when the neutron star entered the atmosphere of the giant star, during which the giant star expelled most of its surrounding envelope of hydrogen. The final explosion created a GRB-like jet. This ejected material was cooling down progressively from 1 million K immediately after the burst, to about 5,000K 20 days after the event.

Finally, about 10 days after the explosion a faint light source that looked like an exploding star (called a supernova) started to emerge, reaching its maximum brightness 40 days after the GRB. The best fit for this scenario is a Type Ic supernova at a distance of 5.5 thousand million light-years. Thöne's proposed helium-neutron star scenario predicts that such a weak supernova will emerge after the GRB.

“Even after many years of research, GRBs still have new surprises waiting for us," Thöne said. "Similar to the increasing diversification of supernova classes, the classification of GRBs might have to be revisited. Stars seem to find many different ways of how to die.”

The installation of CQUEAN on the Otto Struve Telescope at McDonald is the result of a long-standing collaboration between The University of Texas astronomy program and the Korean astronomical community. Soojong Pak received his PhD at Texas, and is working with the university on another forthcoming instrument called IGRINS. The university and the Korea Astronomy and Space Science Institute are also both partners in the planned Giant Magellan Telescope 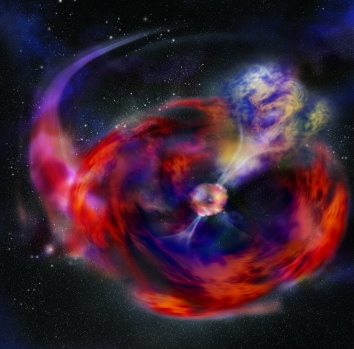