Observations made with NASA's Spitzer Space Telescope have provided surprises concerning the presence of buckminsterfullerenes, or "buckyballs," the largest known molecules in space. A study of R Coronae Borealis stars by David L. Lambert, Director of The University of Texas at Austin's McDonald Observatory, and colleagues shows that buckyballs are more common in space than previously thought. The research will appear in the March 10 issue of The Astrophysical Journal.

The team found that "buckyballs do not occur in very rare hydrogen-poor environments as previously thought, but in commonly found hydrogen-rich environments and, therefore, are more common in space than previously believed," Lambert says.

Buckyballs are made of 60 carbon atoms arranged in shape similar to a soccer ball, with patterns of alternating hexagons and pentagons. Their structure is reminiscent of Buckminster Fuller's geodesic domes, for which they are named. These molecules are very stable and difficult to destroy.

Robert Curl, Harold Kroto, and Richard Smalley won the 1996 Nobel Prize in chemistry for synthesizing buckyballs in a laboratory. The consensus based on lab experiments has been that buckyballs do not form in space environments that have hydrogen, because the hydrogen would inhibit their formation. Instead, the idea has been that stars with very little hydrogen but rich in carbon — such as the so-called "R Coronae Borealis stars" — provide an ideal environment for their formation in space.

Lambert, along with N. Kameswara Rao of Indian Institute of Astrophysics and Domingo Anibal García-Hernández of the Instituto de Astrofisica de Canarias, put these theories to the test. They used Spitzer Space Telescope to take infrared spectra of R Coronae Borealis stars to look for buckyballs in their chemical make-up.

Studies published last year, including one by García-Hernández, showed that buckyballs were present in planetary nebulae rich in hydrogen.

Together, these results tell us that fullerenes are much more abundant than previously believed, because they are formed in normal and common "hydrogen-rich" and not rare "hydrogen-poor" environments.

The current observations have changed our understanding of how buckyballs form. It suggests they are created when ultraviolet radiation strikes dust grains (specifically, "hydrogenated amorphous carbon grains") or by collisions of gas. The dust grains are vaporized, producing an interesting chemistry where buckyballs and polycyclic aromatic hydrocarbons are formed. (The latter molecules of a variety of sizes are formed from carbon and hydrogen.)

Buckyballs have been found on Earth and in meteorites, and now in space, and can act as "cages" to capture other atoms and molecules. Some theories suggest that the buckyballs may have carried to the Earth substances that make life possible. 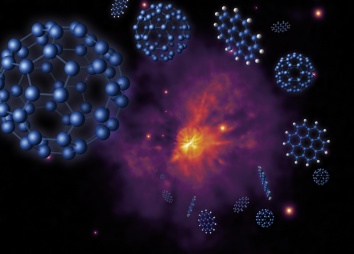 Buckyballs Around a Hydrogen-Rich Star