An international consortium of astronomers, including undergraduate and graduate
students at The University of Texas at Austin, have discovered a planetary system
consisting of at least two massive Jupiter-like planets orbiting the extremely close
binary star system NN Serpentis. The team used a wide variety of observations
taken over two decades from many telescopes, including two at The University of
Texas at Austin’s McDonald Observatory in West Texas. The results are published
online in the current edition of the journal Astronomy & Astrophysics.

Because of the disturbing effects of a binary star system’s gravity, astronomers
normally do not expect to find planets in such systems, but the research team was
able to use the eclipses of the stars as a precise clock whose irregularities could be
used to detect planets in orbit around the binary.

The most massive star at the center of the planetary system is a very small (just 2.3
times larger than Earth) and very hot (50,000 degrees Kelvin) white dwarf
— the burnt-out cinder left over when a Sun-like star dies. The other star in the pair
is a modest but larger cool star with a mass only one-tenth that of the Sun. The two
stars are joined in a very tight mutual orbit.

Due to a fortunate accident, Earth lies in the same plane as this binary star system,
so every 3 hours and 7 minutes we can see the eclipse which occurs when the larger
star moves in front of the smaller one.

The resulting dramatic change in the brightness of the system acts like a highly
precise clock. Using the eclipses as tics of this clock, the team of astronomers was
able to detect changes in the timings of the tics, which reveal the presence of two
planets orbiting the pair of stars. The more massive planet is about 5.9 times more
massive than Jupiter. It orbits the binary star every 15.5 years at a distance 6
Astronomical Units. (One AU is the Earth-Sun distance of 93 million miles.) Closer in,
the other planet orbits every 7.75 years and is about 1.6 times more massive than
Jupiter.

The planets may have been born along with their parent stars, but only if they were
able to survive a dramatic event a million years ago: when the original primary star
bloated itself into a red giant, it caused the secondary star to plunge down into the
present very tight orbit, thereby casting off most of the original mass of the primary.
Alternatively, the planets may have formed very recently from the cast off material.

The discovery was made possible by an international consortium of astronomers,
hailing from Germany (Georg-August-Universität in Göttingen, Eberhard-Karls-
Universität in Tübingen), Chile (Universidad de Valparaiso), the United States (University of Texas at Austin), and the United Kingdom (University of Warwick and
the University of Sheffield). Many of the eclipse timing observations were obtained
in West Texas, on the 1.2-meter MONET telescope and the 2.1-meter Otto Struve
Telescope at McDonald Observatory.

Many of these Texas observations were in large part facilitated by George Miller, an
astronomy and Plan II junior at The University of Texas at Austin, who became
involved in the project through UT’s Freshman Research Initiative in Spring 2009.
The Freshman Research Initiative offers first-year undergraduate students a unique
opportunity to engage in cutting-edge research projects. Astronomy professor Don
Winget is the project’s faculty leader. McDonald Observatory research scientist Mike
Montgomery is the project’s research educator. Astronomy graduate student JJ
Hermes is the project’s teaching assistant.

The discovery of planets outside our solar system is becoming more common — to
date, astronomers have confirmed nearly 500 such extrasolar planets. However,
only a tiny fraction of these planets have been found to orbit stars which themselves
are in binary or multiple systems, simply because there is little room between the
stars for planets to form.

The two planets in NN Serpentis are not currently very close to the binary stars, but
the double star system was not always as tight as it is now. Back when the present
white dwarf star was a normal star, twice as massive as the Sun, the two stars were
separated by about 1.5 AU, and eclipses would have happened about once every
two years.

When the more massive star ended its normal life burning hydrogen in its core (as
the Sun does now), it bloated itself into a red giant star, increasing it’s radius from
about twice that of the Sun to more than 300 times larger, thereby engulfing the
other star in its diffuse outer envelope. The friction of the companion star moving
within the red giant made the less massive star plunge deep into the red giant — a
process very like the re-entry of a spacecraft in Earth’s atmosphere, called a
“common envelope phase” by astronomers.

The resulting release of orbital energy and angular momentum within the short
span of a few decades resulted in the loss of 75 percent of the red giant’s mass,
leaving only the intensely hot core of the original star and a relatively unscathed
companion star orbiting extremely close in to this newly created white dwarf.

The dramatic change from a normal double star system to a tight binary containing
a hot white dwarf must have been even more dramatic for any planets present
beforehand: the loss of 75 percent of the original star’s mass meant that 75 percent
of the original star’s gravity was also gone. This could easily result in the release of
the planets, sending them careening off into space, or it may simply have resulted in
a dramatic change in the planet’s orbits.

Given that the dangers for any such “first-generation” planets are so great, one must
also consider a wild and equally dramatic “second-generation” alternative: The
planets now seen around NN Serpentis were created only a million years ago during
the common envelope phase when large amounts of gas and dust were cast off,
forming a more massive version of a proto-planetary disk in which new and very
different planets might have been formed. If so, then it is possible that these massive
planets were in fact born after the death of the star that enabled their creation.

Whatever the origin of the resulting planetary system, one is reminded of the
famous scene in the movie “Star Wars,” where the young Luke Skywalker watches
the setting of a double star system from the circumbinary desert planet Tatooine.
Unfortunately, the two planets discovered in NN Serpentis are giant gas planets and
thus unfit for life as we know it. However, there may be undiscovered planets
orbiting even closer to NN Serpentis, in the so-called “habitable zone” around the
binary star where water could exist in liquid form. If so, it is possible that a real
Tatooine lurks there waiting to be discovered, and a real binary star sunset waiting
to be pondered.

Established in 1932, The University of Texas at Austin McDonald Observatory near
Fort Davis, Texas, hosts multiple telescopes undertaking a wide range of
astronomical research under the darkest night skies of any professional observatory
in the continental United States. McDonald is home to the consortium-run Hobby-
Eberly Telescope, one of the world’s largest, which will soon be upgraded to begin
the HET Dark Energy Experiment. An internationally known leader in astronomy
education and outreach, McDonald Observatory is also pioneering the next
generation of astronomical research as a founding partner of the Giant Magellan
Telescope.

MONET, the Monitoring Network of Telescopes, is funded by Astronomie & Internet,
a Program of the Alfried Krupp von Bohlen und Halbach Foundation, Essen. 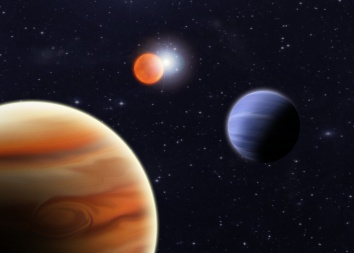