AUSTIN, Texas —An experiment to determine the nature of “dark energy,” that mysterious force that’s causing the universe’s expansion to speed up, is driving telescope upgrades and the creation of new instruments at McDonald Observatory in West Texas. The exciting science results already obtained from this project demonstrate the power of the researchers’ approach.

University of Texas at Austin astronomers Karl Gebhardt and Gary Hill will detail the Hobby-Eberly Telescope Dark Energy Experiment (HETDEX) at a news conference at the 211th meeting of the American Astronomical Society today.

Planned upgrades to the Hobby-Eberly Telescope (HET), one of the largest telescopes in the world, include a new top end to widen the telescope’s field of view, and a new instrument. Called VIRUS (Visible Integral-field Replicable Unit Spectrograph), it will be placed at the telescope’s prime focus.

“This is the Henry Ford approach to doing astronomy,” Hill said, citing the assembly-line nature of building the 145 copies of a simple spectrograph that will make up VIRUS. “It’s a new mode for building big instruments.”Once in place, VIRUS will map the positions of more than a million galaxies in three dimensions over 100 nights. Scientists will then study this map for evidence of “baryonic acoustic oscillations,” a pattern of sound waves imprinted on the universe at a very early time after the Big Bang.

By looking at galaxies at different distances, the survey will map the changes in the pattern of baryonic acoustic oscillations over time, effectively providing us with evidence of how dark energy has changed over the history of the universe.

This approach to studying dark energy employs very simple physics, the team says. Further, because the HETDEX project is designed in phases, it will accommodate changes in scientific understanding along the way. That’s important, the team said, as “our ignorance is so great.”

The mystery of dark energy has been called the greatest problem in all of science today. There are more than a dozen projects preparing to study dark energy, some costing more than $1 billion and planned by federal agencies like NASA, the Department of Energy, and the National Science Foundation, as well as several international institutions.

HETDEX is a small but powerful project based at McDonald Observatory with the cooperation of the HET partner institutions, as well as Germany’s Astrophysikalischen Institut Potsdam. Texas A&M University and Texas Tech University are also involved in the project.

Costing $34 million, two-thirds of which already has been raised, HETDEX is relatively inexpensive when compared to the cost projections for large federal dark energy projects. A small project, HETDEX can move quickly and will have results in the near-term (2010-2013).

The HETDEX team has built a prototype of the VIRUS instrument, consisting of a single spectrograph, and deployed it on the 2.7-meter Harlan J. Smith Telescope at McDonald Observatory to carry out a pilot survey for the HETDEX project. This end-to-end test “mitigates our risk quite extensively,” Gebhardt said.

Not only that, but it’s enabling some other exciting science, too, Gebhardt said. Many of the projects now under way with the VIRUS prototype are being presented at the American Astronomical Society meeting. They show the instrument’s versatility, ranging from topics of dark matter in cluster galaxies (poster 011.22 by Jeremy Murphy), to studies of the extended halo of a radio galaxy (poster 044.02 by Joshua Adams), to studies of a planetary nebula (poster 100.04 by Sehyun Whang).

The VIRUS prototype is a great instrument in its own right, but “when you multiply that by 145 and put it on a 10-meter telescope,” Gebhardt said, referring to HET, “it’s just tremendous what we’re going to be able to do.”

The Hobby-Eberly Telescope is a joint project of the University of Texas at Austin, the Pennsylvania State University, Stanford University, Ludwig-Maximillians-Universität München, and Georg-August-Universität Goettingen. 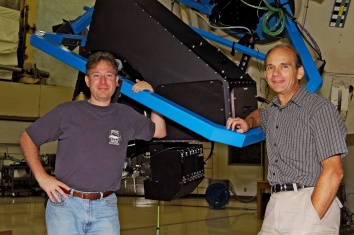