AUSTIN, Texas — We all start to party less around middle age, and new studies by a team led by University of Texas at Austin astronomer Shardha Jogee now finds that the universe, as a whole, is no exception. Jogee discussed her results today at a news conference at the 211th meeting of the American Astronomical Society.

According to the current models of galaxy formation, dubbed “hierarchical lambda cold dark matter” models, galaxies built up to their current masses, shapes, and sizes through the successive mergers of less massive protogalaxies made of gas, stars, and dark matter. In the first quarter of the universe’s lifespan, the cosmic landscape was dominated by violent galaxy mergers, which could radically transform the shape of a galaxy and convert its gas into stars at an extreme rate. More than half of bright galaxies were indulging in such violent “partying.”

New research is showing that all changed when the universe hit middle age. “Our study finds that over the last 7 billion years, after the universe hit its mid-forties, so to speak, it transitioned from a violent merger-driven mode into a quieter mode,” Jogee said.

She and her team find that over each billion-year interval, only 10% of galaxies are typically involved in strong interactions and mergers.

Jogee’s research team includes University of Texas at Austin students Sarah Miller and Kyle Penner, as well as her colleagues in the international GEMS collaboration, whose principal investigator is Hans-Walter Rix of the Max Planck Institute for Astronomy. Jogee’s team has analyzed more than 5,000 galaxies imaged by Hubble Space Telescope as part of GEMS, one of the largest-area surveys conducted with Hubble in two filters.

“With Hubble’s spectacular resolution,” Penner said, “we could discern amazing tell-tale clues of the mergers and interactions — huge tails, warps, ripples, double nuclei — in galaxies billions of light-years away.”

“It’s been exciting to apply different complementary techniques in this large survey,” Miller said, “and to sift through the merger history of the universe during this elusive era.” Miller is the recipient of a 2008 Rhodes scholarship from Oxford University.

In addition to estimating the frequency of mergers, Jogee and her colleagues found that contrary to what is commonly assumed, the average star formation rate in these interacting and merging galaxies is only enhanced by a modest factor of two to three compared to that in normal non-interacting galaxies.

“While extreme bursts of star formation, so-called cosmic fireworks, may happen in some galaxy mergers or interactions, they are not the norm in the vast majority of galaxy interactions taking place over the last 7 billion years,” Jogee said.

The findings of Jogee’s team result from a powerful synergy of data from NASA’s Hubble and Spitzer space telescopes. “Mid-infrared observations from the Spitzer Space Telescope, taken by George Rieke of The University of Arizona, were key for tracing hidden star formation, obscured by dust,” Jogee said. “The exquisite resolution of the GEMS Hubble data in turn allowed us to identify strongly interacting and merging galaxies at much earlier cosmological times than conventional ground-based telescopes,” said team member Daniel McIntosh of the University of Massachusetts, Amherst.

Jogee and her team, in fact, find that only 20% of the total cosmic star formation that took place over the last 7 billion years appears to come from strongly interacting and merging galaxies. These results extend the similar trend found for a smaller sample of about 1,500 galaxies over a narrower time interval by fellow team members Christian Wolf from Oxford University and Eric Bell of the Max Planck Institute of Astronomy.

Furthermore, the results reported by Jogee and her team on the modest fraction (about 20%) of merger-induced star formation, and the frequency of galaxy mergers over the last 7 billion years, are in remarkably good agreement with prevailing theoretical cold dark matter models of galaxy evolution.

According to team member Rachel Somerville of the Max Planck Institute of Astronomy, “Mergers are thought to be a crucial process in transforming galaxies, causing bursts of star formation, and perhaps even feeding gas to the supermassive black holes lurking in the galaxy’s nucleus.

“Although the frequency of mergers predicted by the models agrees quite well with the observed frequency,” Somerville said, “these observations can also teach us much more about the effect these violent episodes have on galaxies.”

In fact, Jogee said, “Our results raise many additional questions which can only be addressed with next generation facilities. For example, the cosmic star-formation rate is declining in normal galaxies, but it remains unclear what drives this decline. Are galaxies using up their internal cold gas supply, or is the accretion rate of gas from external filaments declining?”

Next-generation radio facilities, such as ALMA [the Atacama Large Millimeter/Sub-millimeter Array] will be critical for exploring how the cold gas content of galaxies changes over the last seven billion years, she said.

“Another key thing to note is that some of our results starkly disagree with prevailing hierarchical models of galaxy evolution,” Jogee said. According to these models, the frequency of pure disk galaxies or so-called “bulgeless galaxies” is expected to be extremely low, because a past major merger in the life of every galaxy invariably builds a bulge.

Contrary to such predictions, postdoctoral fellow Fabio Barazza, formerly working with Jogee at The University of Texas and now at Geneva Observatory’s Ecole Polytechnique Federale de Lausanne, found that about 20% of present-day spiral galaxies are bulgeless or disk-dominated, based on the analysis of about 1,000 galaxies from the Sloan Digital Sky Survey.

“We also see striking super-thin bulgeless galaxies in GEMS, at earlier epochs,” Jogee said. “We yet have to characterize the frequency and origin of these enigmatic bulgeless galaxies at different epochs, but there is no denying their prevalence in the local universe.”

All in all, “We have made important headway in piecing part of the cosmic puzzle of galaxy evolution, but daunting challenges loom ahead for both observers and theorists, “ she said. 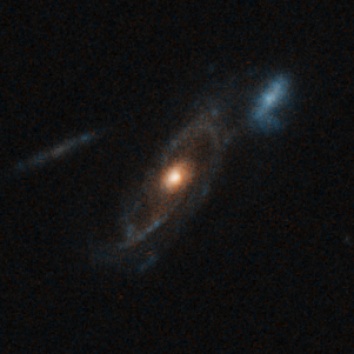 Interacting Galaxies from GEMS (1 of 4) 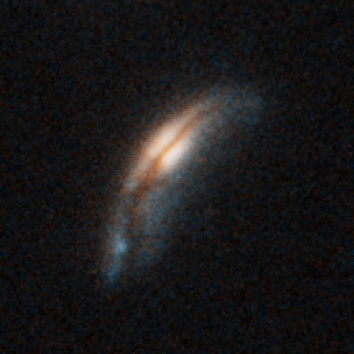 Interacting Galaxies from GEMS (2 of 4) 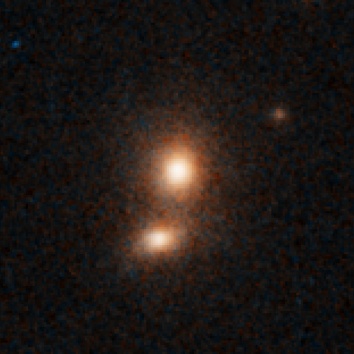 Interacting Galaxies from GEMS (3 of 4) 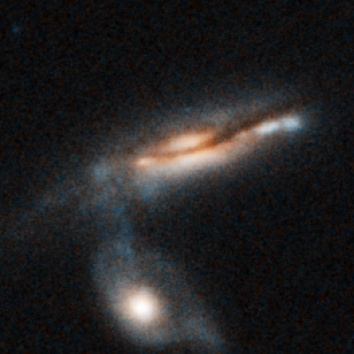 Interacting Galaxies from GEMS (4 of 4)